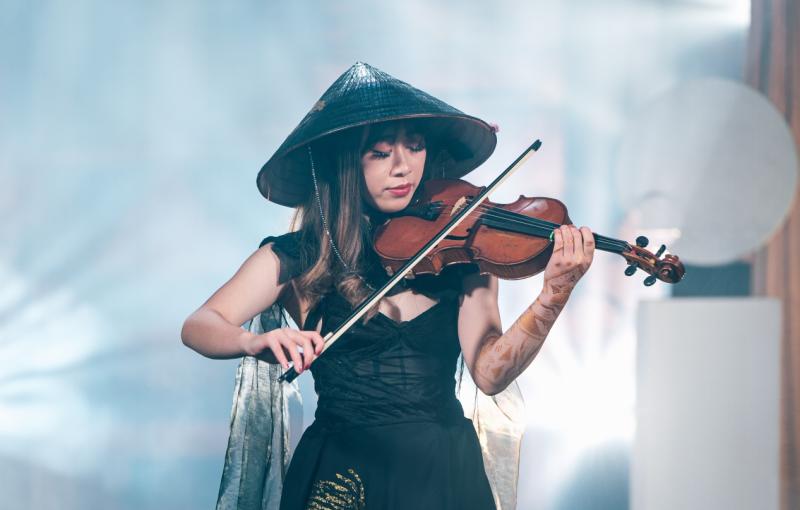 A local Dundalk Grammar student has reached the final of Junk Kouture, a fashion competition to be aired on RTE next Thursday night.

Grace Kenneally will battle it out with 40 other secondary school students to impress a star-studded panel of judges including model Roz Purcell, former X Factor judge Louis Walsh and fashion designer Stephen McLaughlin.

Grace will hope to fend off the competition with her piece ‘Songge Da Long’ an outfit inspired by her Vietnamese and Chinese heritage that draws influence from ancient Eastern designs.

“I was adopted from Vietnam at a really young age but recently discovered that I am ethnically Chinese. I know that a lot of people have difficulty with identity and I am no different. I wanted to pay homage to my heritage through the Junk Kouture platform and I hope that I have done that.”

Grace had a clear design vision and was determined that her outfit would be practical as well as stylish:

“I wanted it to be wearable and something that would travel well without any issues. To be honest, I felt a bit insecure about whether my design was extravagant enough after seeing some of the other entries, but I stuck to my guns and it paid off. It still feels like a dream to have made it this far, especially considering I’m the only one from Louth.”

While Thursday night will be a happy occasion, Grace will have one person in particular on her mind:

“I lost my dad earlier in the year, but he supported me the whole way through the competition. He knew that I had made it into the grand finale and was so excited to see it. I’m sad that he can’t be here to watch it with us and to see the result but it makes me want to win even more. We’ll just have to sit tight!”

Viewers at home will also have the chance to have their say and vote for their favourites with the RTÉ 2FM Audience Award. They can vote online on RTÉ.ie from 9th - 19th December with the winner announced on RTÉ 2FM on Monday 20th December.

The final will air on RTÉ2 and RTÉ Player on Thursday 9th December at 7pm, with the overall winner announced live on television as well as the five regional winners.