Border Communities Against Brexit held a protest in Louth 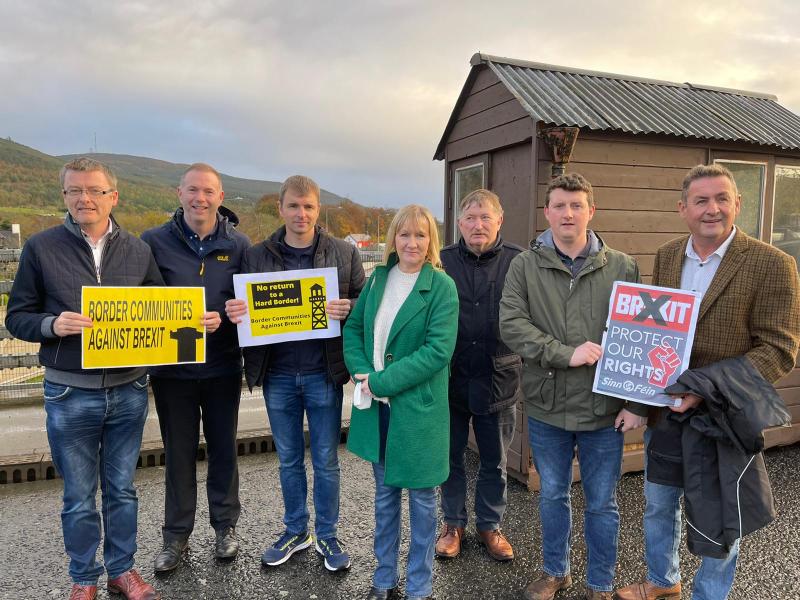 There can be no hardening of the border in Ireland, regardless of ‘sabre rattling’ by British Prime Minister Boris Johnson, according to Dundalk TD Ruairí Ó Murchú.

The Sinn Féin deputy was one of a number of public representatives from both sides of the border who joined a protest, organised by community group Border Communities Against Brexit (BCAB) at Carrickcarnon on Saturday afternoon.

The Louth / Armagh border event was one of a number organised in border areas by the group which aimed to send a message to Boris Johnson and Brexit Minister David Frost to ‘back off’ the Irish Protocol.

Deputy Ó Murchú said the speakers at Carrickcarnon, including BCAB co-founders Damian McGenity and Declan Fearon as well as Queen’s University professor Colin Harvey, were ‘clear in their message about the absolute need for the Irish Protocol’.

The TD said: "The British government has maintained a threat to trigger Article 16 and undermine the Irish Protocol.

"They have used the Protocol and elements of political unionism as tools in their high stakes poker game with the European Commission.

"Should they follow through on their threat, it could lead to a hardening of the border in Ireland, a situation that cannot be countenanced.

"Businesses, communities, retail, farmers and the majority in the North who are affected by Brexit have said that the protocol is working and is workable. It needs to be protected.

"Many see huge advantages for the North in economic terms of having access to both the EU single market and the British market.

"The EU has already moved considerably and indicated it is willing to deliver on further technical aspects but is not willing to deviate from the point that the protocol is needed.

"Professor Harvey told the protest that the issue of Irish unity is live and there is an onus on the Irish government to start seriously planning for it. This is the real solution to the difficulties we are facing.

"Time and time again, I have reiterated in every forum available, including at recent Conference on the Future of Europe meetings in Strasbourg, that the time for planning for Irish unity is now.