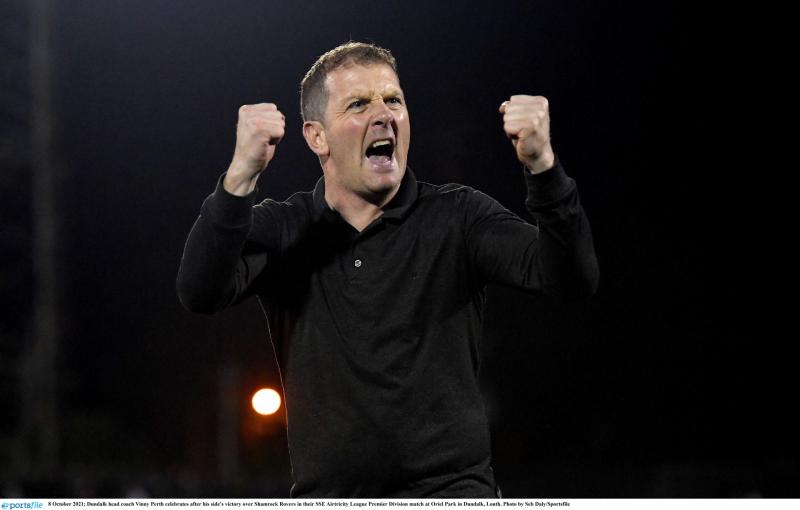 By Niall Newberry at Oriel Park

Dundalk’s revival continued at Oriel Park on Friday night as they defeated champions elect Shamrock Rovers to climb up to sixth-place in the SSE Airtricity League table.

Despite more protests against the clubs owners, Peak6, Sean Murray’s goal on 32 minutes proved to be decisive in what was a true battle between two old foes.

The Lilywhites started brightly at what was a sold-out Oriel, and they almost went ahead on six minutes after Patrick Hoban played in Michael Duffy, who then cut it back to Darragh Leahy, whose shot was deflected just over by former Dundalk man Sean Hoare.

Another ex-Lilywhite, Richie Towell, also went close at the other end, but his effort trickled just wide of Peter Cherrie’s post after Aaron Greene did well out on the right.

Vinny Perth’s side were enjoying themselves against the league leaders, and Sam Stanton fired miles over the bar from distance, but the hosts did hit the front after 32 minutes.

Leahy’s ball over the top found its way to Duffy and he slipped in Hoban, whose reverse pass was met by the inrushing Murray, who slotted effectively into the bottom corner.

Murray has been one of Dundalk’s stand-out performers of late, and at the other end, he brilliantly cleared off the line to deny Towell’s low drive before the ball eventually found its way back to the Rovers man, but his volley sailed just over the top of Cherrie’s bar.

Gary O’Neill should have levelled on 44 minutes, but he blazed over from close range; while Cherrie pulled off a world-class save to deny Dylan Watts in first-half stoppages.

The second half offered very little in the way of chances at both ends, but was a nonetheless entertaining affair given the combative nature of both teams, coupled with a magnificent atmosphere created by the home support, who helped their team hang on.

From a difficult angle, substitute Rory Gaffney unleashed a shot which went off target, but Dundalk ultimately held out for what was a terrific result on their home patch.