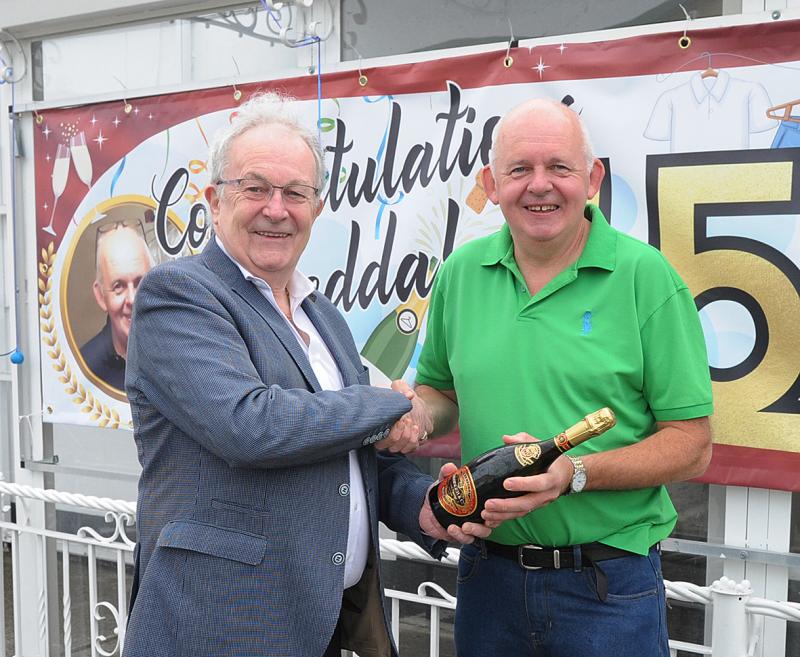 Local man Gerry Renaghan was celebrated last week for his 45 years of service to Smack Dry Cleaners, with staff surprising him with a banner and champagne for his work.

Mr Renaghan said that the last 45 years with the dry cleaners have been “grand” and that the 45 years have flown by since he started.

He first started with Smack back in September 1976 and has worked there ever since.

“It’s hard to believe it is 45 years, I never thought when I started I’d be still here in 45 years and that’s being honest with you.

He was taken by surprise with the celebration, saying that he was a bit embarrassed by it all, with everyone in the shop being in on the surprise but him.

Mr Renaghan said that while he knew how long he’d been working in Smack, he didn’t think anyone else knew.

“I knew when it was and the whole lot, but I didn’t think I was going to run into this,” said Mr Renaghan.

“Richard told Gabrielle, my wife, to delay me coming in so they made sure everyone was here.

“My family was here and all the staff was in, even if they weren’t working, that was between the print shop and here [Smack].

“So it was quite surprising, in all honesty, I was caught.”

Mr Renaghan says while he’s been getting some congratulations, there’s no shortage of slagging from some customers.

“The banner is still up, I’ve been getting a bit of nice things and a bit of abuse as well, plenty of slagging.

Mr Renaghan says his time with Smack has just flown by, and that he has a great fondness for the Old Shopping Centre, where Smack used to be located.