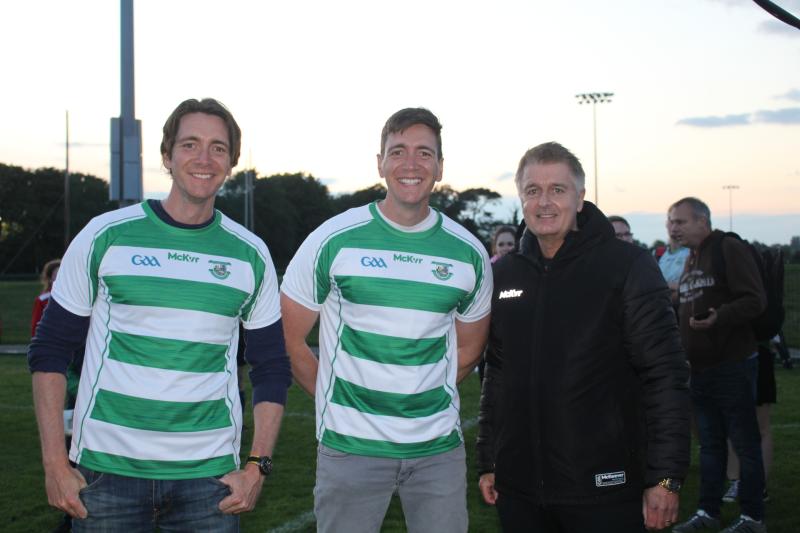 The Phelps twins pose with their St Fechins jerseys

Three stars from the Harry Potter films made an appearance at a senior hurling game in Darver last week.

Evanna Lynch, who plays Luna Lovegood, and James and Oliver Phelps, who play the Weasley twins, made an appearance at the St Fechins v Naomh Moninne Senior Hurling game in Darver last week.

Ms Lynch, who is originally from Termonfeckin in Louth, and the Phelps twins were at the match as part of filming for a travel programme with the cast of Harry Potter.

Ms Lynch plays Luna Lovegood in the film franchise, a witch from Ravenclaw who was first introduced in the fourth film, before moving to play a pivotal role in the franchise.

The Phelps twins play the twin Weasleys, Fred and George, two jokers who spend their time in the films playing pranks on one another and those around them, before setting up a joke shop in later films.

The trio, which were originally reported to be attending the match by St Fechins, appeared on the sidelines of the game.

After the game, the Phelps twins were presented with St Fechins jerseys, before being photographed wearing them.

The three stars then spent time posing for photographs with fans of the films, and signed autographs for people who attended the match.

“St Fechins had additional support at their recent Senior Hurling Match in Darver, with Evanna Lynch & the Phelps brothers cheering them on from the sidelines,” said St Fechins PRO Michelle Mooney.

“They were there as part of a travel programme the Phelps brothers are filming with the cast from Harry Potter.

“There was great excitement at the end both when the Fechins won the match and when they kindly posed for photos and signed autographs for young and old alike.”