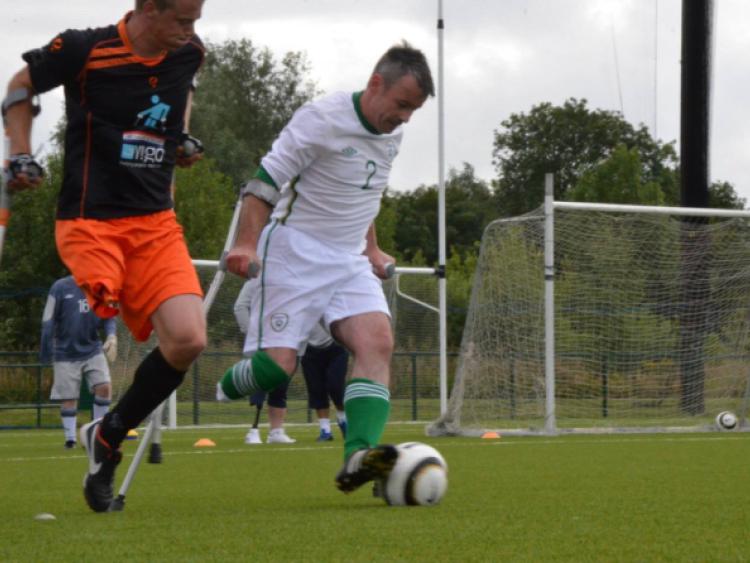 Dundalk-man Gary Hoey will be on the Irish squad when the Irish amputee football team take part in the Amputee Football World Cup in Culican Mexico at the end of this month. The team will compete during the eight-day tournament against the best in the world, including the current World Champions Uzbechistan and past winners Great Britain.

Dundalk-man Gary Hoey will be on the Irish squad when the Irish amputee football team take part in the Amputee Football World Cup in Culican Mexico at the end of this month. The team will compete during the eight-day tournament against the best in the world, including the current World Champions Uzbechistan and past winners Great Britain.

Twenty-two international teams from across the globe will compete.

Amputee Football was founded in the 1970s in America and today has established teams in over 32 countries. The sport was recently considered for inclusion in the Paralympic Games.

Gary trains with the Irish amputee team in Limerick.

“We meet once a month and spend the weekend training in Limerick,” said Gary. “Then each player is given a training programme that they work on over the month. Our coach is Christy McElliott, himself an amputee who at once time played for St Pat’s.

“Paddy Power is the team’’s main sponsor and we also have support from the FAI Football for All programme. We also have our own fundraising. But we have been very lucky with Paddy Power.

“There is a squad of 12 going. It includes two goalies, ten outfield players, the coach, physio and high performance coach Alan Heary who was part of boxer Stephen Collin’s team when Collins fought against Chris Eubank.

“The squad will leave for Mexico on 27 November and needless to say we are all looking forward to it,” said Gary.

Gary plays centre mid-field. He lost his leg in an industrial accident.

The rules of the game follow those of standard football but with a few notable exceptions. Outfield players must have an amputation at or above the ankle and use crutches. Goalkeepers must be amputated at or above the wrist. The use of prosthesis’s is prohibited.

The IAFA was founded by Simon Baker, Christy McElligott and with the help and support of the FAI’s Football for All National Co-Ordinator Oisin Jordan in 2011. The IAFA have sent teams to compete internationally in England and Poland and hosted their own six nation tournament in August 2013. In 2014 the IAFA took on the challenge of preparing a squad of elite athletes not just to compete at the Amputee Football World Cup in Mexico but to challenge for the top prize too.

Since January the squad have trained once a month at the University of Limerick.

These weekend training camps have been part funded by the FAI and have seen squad members from across the country assemble to train at the state of the art facilities at University Limerick.

The squad is all fired up for the Mexico event and confident they can take the title.