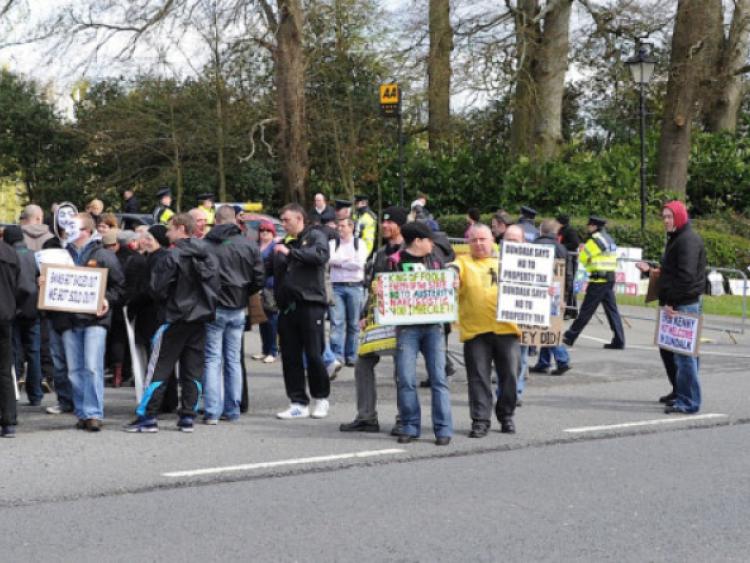 WHILE the atmosphere at Ebay/Paypal opening was jovial one, the mood at the gates to the Ballymascanlon Hotel on Thursday lunch time was of a more sour nature.

WHILE the atmosphere at Ebay/Paypal opening was jovial one, the mood at the gates to the Ballymascanlon Hotel on Thursday lunch time was of a more sour nature.

As many as 80 protesters from various anti-austerity groups gathered outside the popular hotel in bid to make their voices heard, yet in the end they didn’t get the opportunity.

While it was thought An Taoiseach would make his entrance there, news got out around 1.20pm that Mr Kenny had dodged the protesters and was safely enscounced for his lunch up at the hotel.

It also seems that Deputy Peter Fitzpatrick may have provided a helpful foil for his party leader. The TD drove behind a Garda patrol car which protestors initially thought was the Taoiseach.

Initally some protestors stood in the way of the oncoming vehicle, but after a request from Gardaí on site they moved to the side.

Following this news spread among the protestors that Mr Kenny had arrived, though one protestor thought this might have been a ruse to get them away from the gate.

Following this Finbar Markey of The Dundalk Campaign Against Property Taxes and Austerity spoke to surrounding protestor swith a loud speaker.

He suggested that they go for a coffee at the hotel as it is open to the public, though this greeted with a muted response.

Speaking to the Dundalk Democrat Mr Markey said: “He had to go in the back way. We got a good shake, and it’s not over yet.”

There was also a strong Sinn Fein prescence at the protest with Cllr Tomas Sharkey of Louth County Council and Cathaoirleach of Dundalk Town Council Jennifer Green, and councillor Harry Todd.

Cllr Green told the Democrat : “I was invited to the lunch, but I think I would have choked!”