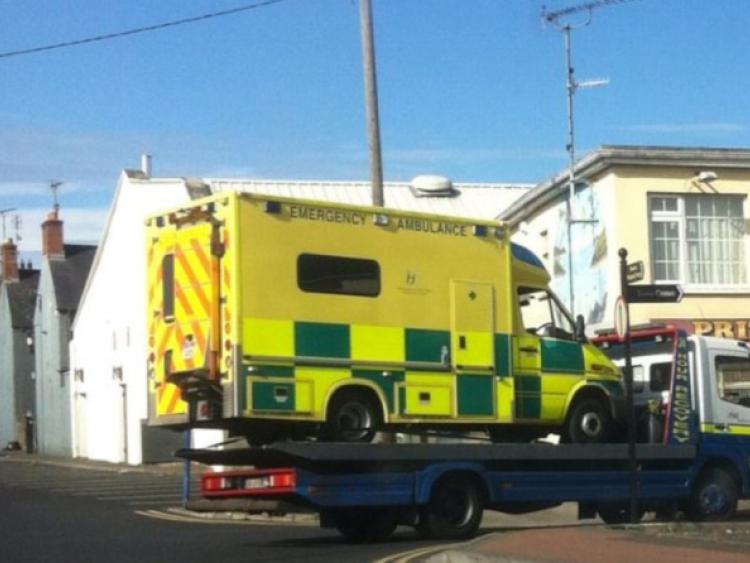 Two Dundalk ambulances broke down at the weekend. This is the third breakdown in two weeks. One of them was taking a woman, who had suffered a heart attack, to Drogheda.

Two Dundalk ambulances broke down at the weekend. This is the third breakdown in two weeks. One of them was taking a woman, who had suffered a heart attack, to Drogheda.

On Saturday night, an ambulance taking the woman from her home at Ashling Park Dundalk to the Lourdes hospital, broke down at Monasterboice and a replacement ambulance had to be called out from Ardee.

In a separate case, an ambulance broke down in Dundalk on Saturday afternoon and had to be towed away.

Sinn Fein councillor Tomás Sharkey, who has already highlighted the crisis facing the ambulance fleet in this area, said the situation is ‘a sham’ and he raised the problem at Monday morning’s meeting of Louth County Council.

A daughter of the woman who became ill on Saturday night, told the Democrat that the hospital staff was on red alert when the ambulance eventually arrived in Drogheda.

It was confirmed in the hospital that her mother had suffered a heart attack and she was told her mother should have had arrived earlier.

Jenny Duffy from Blackrock, had just left her mother home, at her mother’s house, Aisling Park Dundalk on Saturday night.

“Then shortly afterwards I got a call from my sister to say that mum had taken ill and when I went back down, the ambulance was there.

“It arrived very promptly and the paramedics were brilliant.

“Then later I rang my sister who had accompanied my mother in the ambulance.

“She said, you won’t believe it, but we’ve broke down. She said they were sitting on the side of the road at the Monasterboice turn-off for 40 minutes before a replacement ambulance arrived.”

They arrived at the hospital after 1am.

“I just think it is terrible. The HSE will not fund the Louth hospital.

“Lives cannot be put at risk like this. The ambulance staff were really wonderful, but I blame the ambulance service for allowing a fleet out on the road that has not been properly serviced.

“This ambulance should have left Ashling Park, gone down Ecco road, on to the motorway, and reached Drogheda in 25 minutes. Instead it took an hour,” said Jenny.

On Monday Cllr Sharkey expressed growing anger at the problems facing the ambulance service here and the failure to address the issue.

“I wish Jenny’s mum all the best,” Cllr Sharkey said.

“The ambulance staff have to work knowing this is going to happen.

“This is the second ambulance to come off the road in a matter of weeks.

“It’s a sham. To have a scenario when a woman gets into an ambulance at midnight and does not get there till after 1am.”

“We were told the golden hour was safe, that Our Lady of Lourdes is only 25 minutes away.

~”But its not working and I don’t see any sign of anything being provided in the budget to improve the problems with the ambulance service.

“They are using this area as a guinea pig,” Cllr Sharkey said.

Sinn Fein had a motion at Monday morning’s meeting of Louth County Council calling for a proper ambulance service in the North east.

THE HSE confirmed the two ambulances broke down over the weekend and that one was taking a cardiac arrest patient to Drogheda.

It left Dundalk with the patient at 12.07am Sunday morning and noticed a light activated on the dashboard warning panel en route.

Staff requested another ambulance which the National Ambulance Service (NAS) said was dispatched immediately from Ardee.

It was 1.10am before the patient arrived at Our Lady of Lourdes Hospital. The patient was cared for by two paramedics while waiting for the replacement ambulanc e to arrive from Ardee.

In a separate incident, on Saturday afternoon, an ambulance had mechanical difficulties returning from Dundalk to Drogheda. There was no patient on board at the time. The vehicle was taken to a garage for repair.

The two ambulances involved in these incidents are currently out of service but the NAS said the capacity to respond to emergency calls has not be comprised.