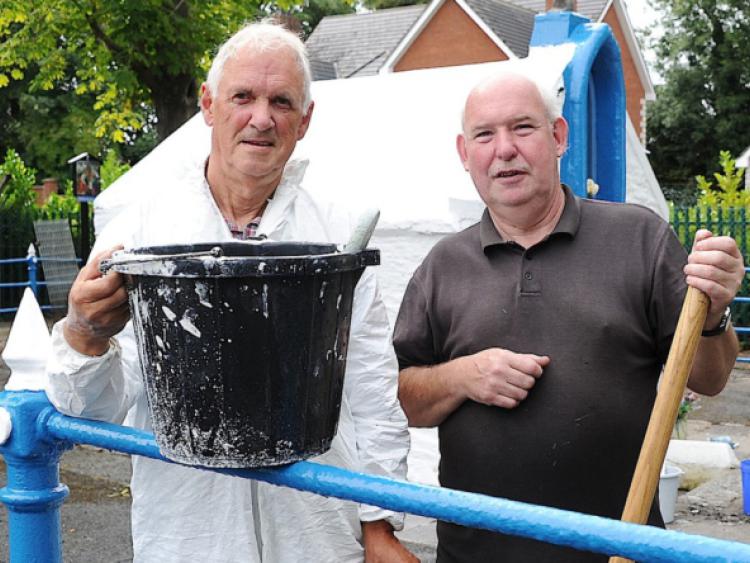 Last week pilgrims from Louth, Meath, Monaghan, Cavan and Armagh made their annual pilgrimage to the Ladywell Shrine in Dundalk.

Last week pilgrims from Louth, Meath, Monaghan, Cavan and Armagh made their annual pilgrimage to the Ladywell Shrine in Dundalk.

Ladywell Shrine is a classic holy well and one of the best known wells in the north-east of Ireland.

Beautifully maintained by the local community and the local authority, it is still the focal point of a hugely popular annual pattern on the 15 August.

It is a tradition that has gone on for many years and this week, many visitors, from all these neighbouring counties, are expected to visit the shrine.

“We are expecting a couple of hundred people to arrive tonight,” said Aidan Boyle, a member of the committee that helps maintain the shrine.

It is not known exactly how old the well is but Thomas Wrights engraving/drawing of the well in 1730 is arguably the earliest detailed visual record of an Irish holy well and clearly indicates that the well is at least 250 years old and is probably medieval.

“We’re not sure exactly how old the well was but it is mentioned as far back as 1617 as far as I know,” said Aidan.

“It used to be situated at the top of the hill here.

““It was repaired in the council in 1895 and in 1954 the railway workers put up the rails which surround the shrine now.”

The water from the well is said to be a powerful ward against evil.

The well house is an original structure apart from the cross over the entrance and modern stations of the cross have also been erected around the well.

“We will have people coming and going all day on the 15th and then after that it will be quiet again,” said committee member Margaret Moore.

“Kevin Dunne will supply water bottles for those looking to take water from the well.”

In conjunction with the event, the Patrick Kavanagh Centre in Inniskeen played host to Seamus Crosson from Dundalk, his family and friends who were commemorating the long standing tradition of pilgrims from Monaghan, Cavan and Armagh visiting Ladywell Shrine in Dundalk.

Patrick Kavanagh’s writing about the annual pilgrimage featured in his autobiography The Green Fool.

The poet, who was first published in The Dundalk Democrat in 1929, describes a visit to Ladywell Shrine in the book.

“Kavanagh talks about the pilgrimmage and how it took all night to reach the well at Ladywell,” said Margaret.

In Kavanagh’s time most made the journey on foot (sometimes with a pebble deliberately placed in their shoe) while some travelled by bicycle or by horse and cart.

The event got underway with a colourful introduction by the organizer, Seamus Crosson, followed by a reading of Kavanagh’s ‘Pilgrimage’ by Eoin Guidara and then a memorable rendering of Kavanagh’s haunting ballad, ‘Raglan Road’ by Seamus and Eoin.

The outstanding fiddle player, Jim McKillock from Cushendall brought the proceedings at the Centre to a close.

The group set off from the Kavanagh Centre in the afternoon on bicycles along the Bothar Bhee to Dundalk.

Before setting out pilgrims heard more beautiful singing from Seamus Crosson and fantastic fiddle playing by Jim McKillock. The pilgrimage was led by Gerry Markey with a horse and trap.