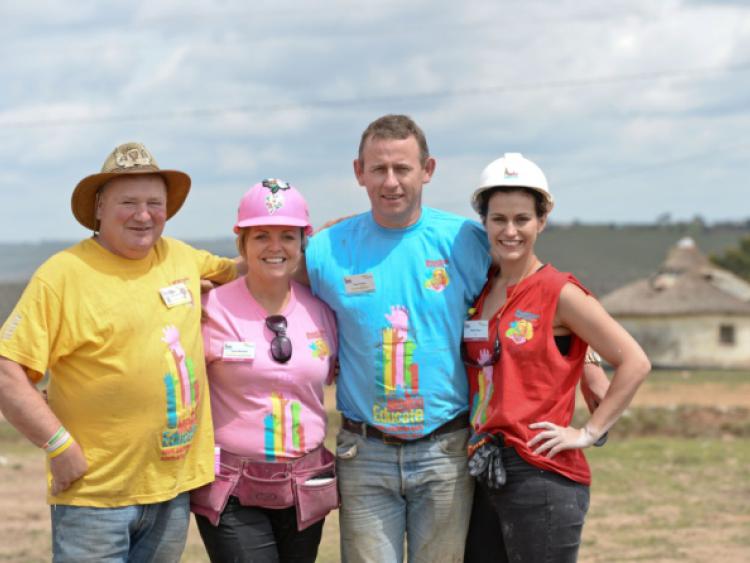 Nine hundred children’s lives have been transformed in Mandela’s homeland of Mthatha, Eastern Cape South Africa, all with the help of three local volunteers.

Nine hundred children’s lives have been transformed in Mandela’s homeland of Mthatha, Eastern Cape South Africa, all with the help of three local volunteers.

They were among 200 Mellon Educate Irish volunteers who have built two schools and great hope for these students. The volunteers have come from over 70 towns and villages across the country, from all walks of life but with the common goal to ensure that the pupils could start their lessons in their new classrooms in the new year.

“This was my tenth anniversary of my first building blitz and this was my twelventh blitz,“ Karen McArdle told the Democrawt. “It’s an addiction at this stage.

“I first visited South Africa in 2003 and saw what the Niall Mellon building programme was doing and I vowed to come back, and in 2004 I did my first blitz.”

Karen says the cameradie and sense of achievement in the work has coming back year after year.

“It’s like your second family. It’s a group of Irish abroad and it’s always great craic and I’ve gotten to make so many friends down through those ten years.”

Mellon Educate is working to transform the lives of children in Africa building an educational future and enabling a new chance in life.

Since 2001 the charity has built homes for 125,000 people and its focus has now turned to education. “The level of poverty in South Africa is something that is hard to get your head around, but despite all the children want to grow up to be doctors, solicitors and enginners, which is a great to them.”

“It’s hard work but I can’t recommend it highly enough. Niall Mellon makes sure safety is number one.”

Schools have been built in the Mukuru Slum, Nairobi and for the children of the township of Imizam Yethu, Cape Town.

The two year teacher training programme tailored to each school has already seen very positive results. Niall Mellon said “education is the key to help these children find a way out of the poverty they are in.

“Our Irish volunteers put their entire efforts into making each week long building blitz a success and I am very proud that we have already made inroads to helping over 1,000 children have a brighter future.

“We were delighted that Rose of Tralee Maria Walsh could join us to keep spirits high as we strived to raise another Irish flag in an area that so richly deserves the help that we can give. We are in the heart of Nelson Mandela’s homeland and his legacy will live on thanks to each of the volunteers who join us to make a real difference to so many.”

It’s been a great week here in Mthatha, we’ve had sun, we’ve had rain and under both blue and grey skies volunteers have laughed, cried, told stories and sang songs. They have made enduring friendships and discovered a different world. Better still despite the banter, craic and laughter the work never stopped and so now we leave this world a little better than we found it.

The next Mellon Educate building blitz takes place in November 2015 in the Eastern Cape, South Africa.