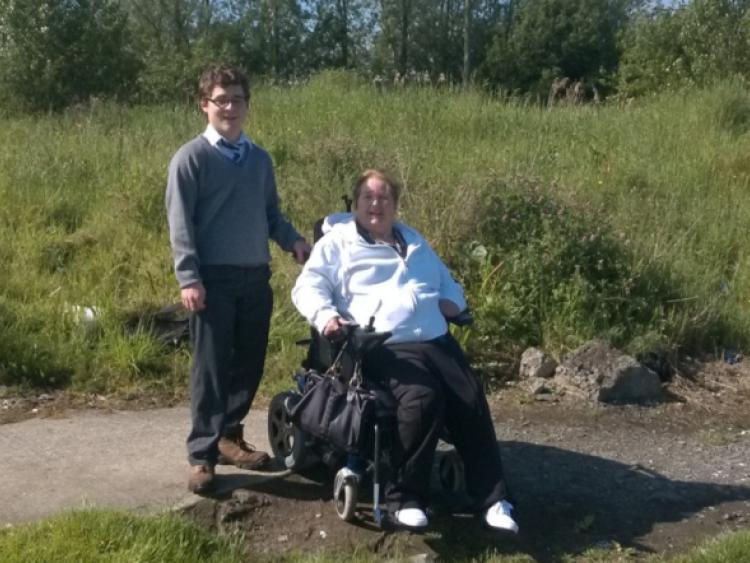 A Bay Estate schoolboy came to the aid of local wheelchair users whose electrically propelled chair had become stuck on a public footpath.

A Bay Estate schoolboy came to the aid of local wheelchair users whose electrically propelled chair had become stuck on a public footpath.

Bridget Doyle from Muirhevnamor was making her way along the bypass on the public footpath, when she came to an area where the footpath comes to an end, about halfway between the Bay Estate/Avenue Rd Roundabout.

The condition of the footpath was in a such a state that her wheelchair literally stuck in the mud.

Trapped and increasingly stressed, Bridget watched as traffic whizzed by on the by-pass .

Luckily for Bridget a student from CBS, Gwion Smith, who lives in Bay Estate, came to her aid.

Speaking to the Dundalk Democrat, Bridget explained how becoming stuck in her chair is now a weekly experience.

“I have to use this route when I got to visit my daughter in Bay Estate.

“It’s the point at which the path goes onto the road where it’s just mud and stones.

“The wheelchair is too heavy to push or pull, and I don’t know how to put it into manual. The young man, came along and a car stopped and anther man helped, and together they got me unstuck.”

The young man in question was Gwion Smith and before he came along, Bridget was stuck for five minutes, a situation she describes as ‘terrible’.

On other occasions she has had to be lifted out of the wheelchair .

“The footpaths around the towns are in terrible condition. The cars have the roads and the bicycle have the cycle-paths but wheelchair users have nothing.

“The people of Dundalk have been brilliant and they always help me when I have been stuck, but you worry that you will get stuck in an area where you won’t be seen.”

The biggest problem for Bridget are the slopes in and off footpaths, which are either absent or in such bad condition that they are impossible to traverse with her wheelchair.

Bridget has been in a wheelchair for five years since a stroke left her paralysed down her left side.

“The town centre is also extremely difficult for wheelchair users.

“Park Street and Clanbrassil Street are very difficult to get about on as the footpaths are in poor condition. And on Thursday bins are left out which you then have to get around.”

Bridget has brought her concerns to the council.

“Something needs to be done badly.

“The council need to be shamed into providing better conditions for wheelchair users.”