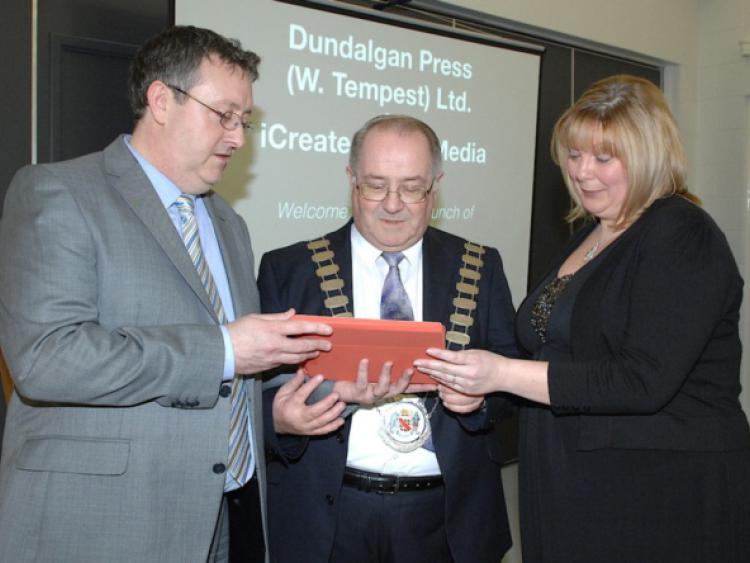 The Tempest’s Dundalk at Work collection has gone digital.

The Tempest’s Dundalk at Work collection has gone digital.

These four books which have already become classics were launched at the Creative Spark building Dundalk.

This collaboration between iCreate Digital Media and Dundalgan Press means the four titles are now available as iBooks.

The Dundalk at Work books – ‘The Shoe Industry’, ‘The Tobacco Industry’ and ‘The Engineering Industry’ along with ‘Dundalk Caught on Camera’ can now be downloaded in 51 countries across the globe.

The project marks a major move for Dundalgan Press as it is the first time the company, with over 150 years history in the publishing industry, has embraced the new technology which will open it up to a worldwide customer base.

Henry McDowell, grandson of William Tempest who set up his publishing firm - later Dundealgan Press - in Dundalk in 1859, was at the launch which was officially opened by Clive Friary of iCreate. Sandra managing director Dundealgan Press also attended.

They spoke to Harry Lee about the project.

Ms McDowdell said that Dundealgan Press had always produced fine quality books but the company knew it had to move forward.

“In the past five years 50 per cent of printers in Ireland have closed,” she said. “so we can’t rely on our traditional buyers.”

She praised Liam Gaynor of Dundalgan Press who came up with the idea for the books and all the team working at the company.

She said there were so many books in their archives, the challenge was to bring them to a 21st century audience.

iCreate’s Founder and Managing Director Clive Friary spoke of the process involved in bringing the four books to their new online status.

“Thanks to iPad technology the photographs are so sharp on the iBooks and we really worked hard to make sure that the editions are of the highest quality.”

Harry McDowell recalled his mother Eileen, sister of William Tempest, his uncle Harry who was honoured by the Royal Academy for the quality of his books.

Going back to the early days of modern technology, he recalled that his illustrious grandfather was the only person in Dundalk who would take the number 13 when telephones first came to Dundalk.

Liam Graynor working with iCreate had been a revealation and Eamonn O’Boyle, Dundalk Town Council, said it was a great step for both comapanies.