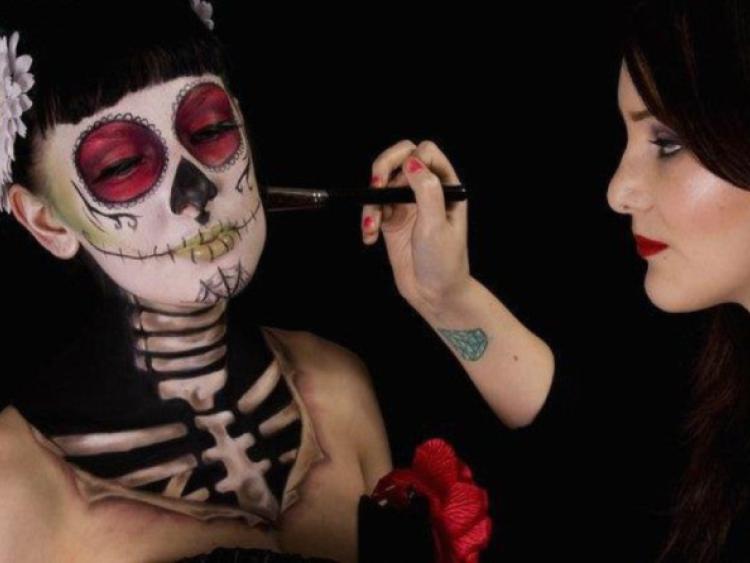 Freelance make-up artist Marie Murphy, who hails from Carlingford, has been selected as a finalist in a worldwide makeup artist competition called The Illamasqua Distinction in Makeup Artistry Awards which were held on Saturday in BAFTA in London.

Freelance make-up artist Marie Murphy, who hails from Carlingford, has been selected as a finalist in a worldwide makeup artist competition called The Illamasqua Distinction in Makeup Artistry Awards which were held on Saturday in BAFTA in London.

Former Dun Lughaigh pupil, Marie flew to London and applied make-up in front of a live audience in BAFTA and the image was cast as a live vote via Facebook.

Marie, who currently works as a graphic designer in Dublin, explained that the competition is made up of four categories and in each catagory there are 4 finalists.

“The catagory I’m in is titled ‘Non-Pro’ as I’m a self taught artist.

“I’m also the only Irish contestant in it.”

The show is being judged by world renowned makeup artist, Alex Box who has done makeup for Vivienne Westwood and been published in magazines such as Vogue.

The other judges include the Beauty Manager of Selfridges and Halle Berry’s makeup artist from LA.

If successful, Marie will win a five-day course in Mastering Professional Make-up at The Illamasqua School of Make-up Art along with £2,000 and £250 worth of Illamasqua make-up.

Marie studied art and graphic design at the Dublin Institute of Technology and says that she draws her inspiration for makeup from horror movies.

“I am an imaginative, creative and passionate makeup artist.

“I draw from my fascination with fashion, popular and alternative culture, film, art and design.

“I completed a BA Honors degree in Visual Communication (Graphic design) which strengthened my artistic skills and visual aesthetics, but ultimately it was a lifetime obsession with makeup that steered me towards my dream job.

“I completed an ITEC awarded course in facial make up in Portobello Institute and I’ve been partially trained with Ken Boylan, Ireland’s top make up artist.

Marie has worked with photographers such as Jason McDonald, Michael Hayes, Griff Pics and Carl Farmer at Red Tree Studio and has been published in international magazines such as ‘Bizarre Magazine’ and ‘The Cat’s Meow’.

“I pride myself on ensuring to produce something unique and innovative. I use nothing except brushes, make up and my imagination.”

To vote for Marie please visit www.facebook.com/illamasqua and ‘like’ Marie’s photo in the Non-Professional category.

You can visit Marie’s Facebook page and see some of her work by logging onto www.facebook.com/MarieVmakeup.