Utrecht came the night before a significant date 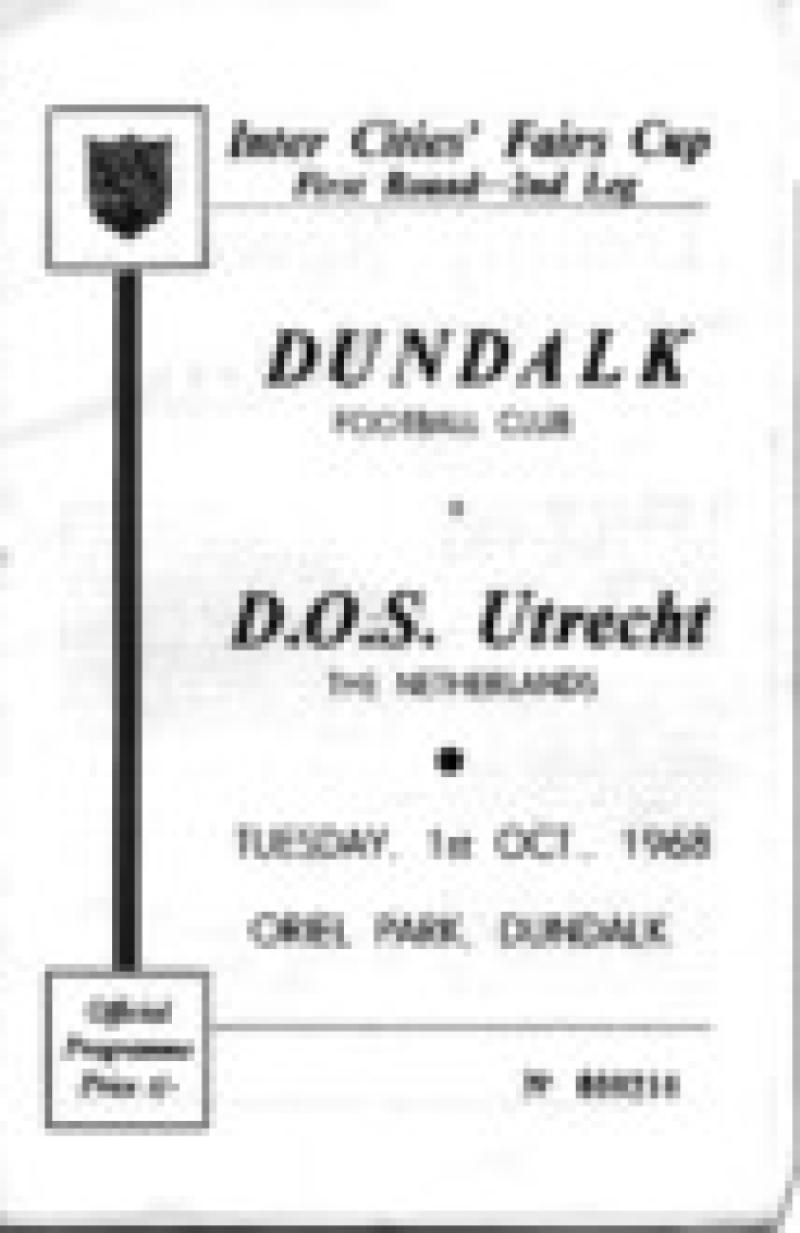 The Dundalk FC European match which I remember better than most others took place on Wednesday, September 11, 1968.

The Dundalk FC European match which I remember better than most others took place on Wednesday, September 11, 1968.

It was in the Fairs Cup, later to become the UEFA Cup, and then nothing at at all, the authorities trimming the number of competitions to today’s two, the Champions League and the Europa League. DOS Utrecht were in opposition to the Tommy Rowe-coached side, and this first round first-leg tie was played in Holland.

How can I be so sure of the exact date? Well, I was due to take my leave of 21, McDermott’s Terrace, for the last time. On the following morning, there would, first of all, be a visit to St Mary’s in Bellurgan, before me, the woman who would become known as The Chancellor, our families and guests headed for Ballymascanlon Hotel. Two days later, there was, for me anyway, a frightening maiden air trip. It was to Rimini, which the brochure said was on Italy’s Adriatic Coast. (It left its mark: I haven’t been beyond England in a plane since then.)

This was at a time when pre-marriage get-togethers were simple affairs – the word ‘stags’ was merely a reference to big-antlered animals, either roaming wild or on a farm. Mine, was held in Russell’s in Park Street, and I was surrounded by Democrat colleagues. It took place about a week before the big day; on the Wednesday night I was at home listening to Philip Greene’s commentary from Utrecht.

Dundalk drew 1-1, the goal coming from Derek Stokes. Sadly, Patsy ‘Tootsie’ McKeown, one of the town’s finest, sustained a career-ending injury after just four minutes. I remember Greene doing his best to comfort the McKeown family back home.

They’re my main recollections of the game, but there was much more to it than that. The story of Utrecht heroics is beautifully conveyed in Jim Murphy’s History of Dundalk FC.

“Jimmy Morrissey dropped back (to replace McKeown) and Ben Hannigan came off the bench. After half and hour, the home side took the lead and shortly afterwards, Dessie O’Reilly’s injury forced another change with Larry Gilmore taking the right-full spot alongside Morrissey – O’Reilly became a virtual passenger on the wing. With two forwards playing as fulls and the opposition one up, the outlook looked bleak. Utrecht, with seven past internationals in their line-up, came into the match with an impressive home European record – four years without a home loss against some serious opposition, Liege, West Bromwich Albion, Barcelona and Zaragoza......What followed was one of the finest performances ever seen by a Dundalk team in a European tie....With 15 minutes remaining, the home fans were silenced when a swinging cross from the injured O’Reilly was headed in by a diving Derek Stokes to equalise the tie and give Dundalk a precious away goal. Against all the odds, Dundalk had achieved a memorable away draw....”

Dundalk did even better in the home lead, winning 2-1 with Stokes again getting on the scoresheet and Jimmy Morrissey adding the other. Oriel housed 6,000, and the win was at the time only the third by a League of Ireland side.

No joy in the following round, and no surprise in that. The mighty Glasgow Rangers had home advantage for the first leg, which they won 6-1, and got three more at Oriel, Dundalk failing to add to Kevin Murray’s Ibrox penalty.

The Utrecht game came to mind last Thursday night. I was at home watching racing from Leopardstown and Lingfield on the telly with one of the next generation and another from the generation after that when a Dundalk Gaels colleague, Peter McGahon, came through on the blower.

“Are you listening to the game,” Peter asked - excitedly, it’s fair to say. I knew Dundalk were playing, but didn’t know it was being broadcast. “It’s on Dundalk FM, and Dundalk are 2-1 up, after being a goal down. There’s not long left.”

A quick switch-on followed to hear John Murphy and Ger Cunningham go through the last few minutes, which, unfortunately, didn’t yield the third goal Dundalk needed to make it to the next round.

Not that it was needed, but on the following day, Democrat soccer guru, Gavin McLaughlin, who was in Croatia along with a couple of others who subscribe to the paper’s sports pages, Padraig Whelan and Ciaran Culligan - see their story of the game in words and pictures further on in this issue - confirmed that it was an heroic performance, one that deserved more than just a win.

Oriel attention now turns to the domestic game’s premier competition. There’s a major coming up in Cork this Friday night, and if successful, Stephen Kenny’s team will be perfectly placed on the turn-in to the competition’s final quarter.