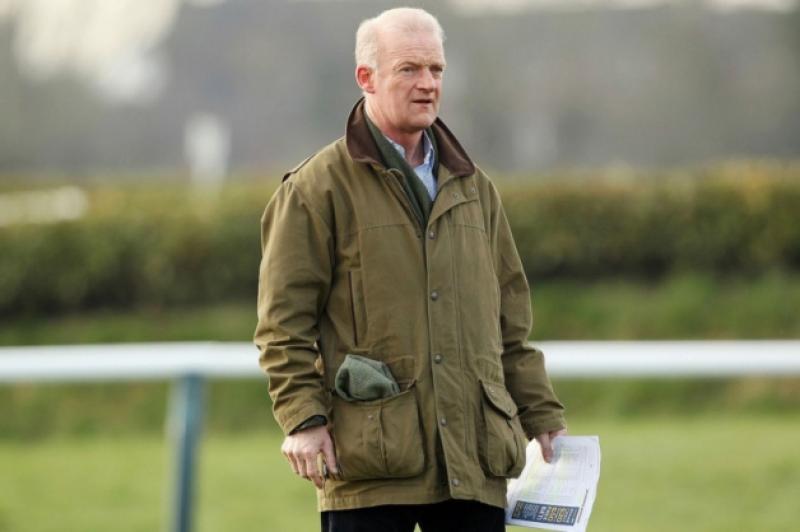 Willie Mullins’ dominance of National Hunt racing in this country mirrors what Aidan O’Brien is doing on the Flat.

Willie Mullins’ dominance of National Hunt racing in this country mirrors what Aidan O’Brien is doing on the Flat.

Neither is working to the exclusion of all others, however. The likes of Jim Bolger, David Watchman, John Oxx and David Marnane are the most formidable opponents of O’Brien’s, and Gordon Elliott, Dessie Hughes, Tony Martin and Noel Meade never end a season without a fair quota of winners, many of them having scored in the races that count.

But it’s the class and sheer volume of their scorers that constantly have Mullins and O’Brien heading their respective tables. Behind O’Brien is a huge breeding operation, one of the biggest in the world. It provides an annual supply of blue bloods, whose expert handling has won their trainer recognition throughout the world.

Neither does Mullins have to worry about where his next debutant is coming from. Some of his patrons are among the wealthiest in the National Hunt game, never shy about shelling out for a promising youngster in this country, or, more especially, in France. His Co Carlow stable has more Gallic breeding than any other, and is, seemingly, bulging at the seams with bright young talent.

The Supreme Novices’ Hurdle is where many who went on to greatness made their Cheltenham bow. The entries for this year’s renewal were published last week and among them were 22 with WP Mullins behind their name. Yes, twenty-two.

Only one or two of that lot will go to post at Prestbury Park, but such a huge entry illustrates perfectly the wealth of talent there is at Closutton, and what is thought of it.

Then there are the ones at the other end of the age scale. Chief among these is the all-conquering Hurricane Fly, who, come mid-March, will be attempting to win the Champion Hurdle for the third time. Whether or not he succeeds, this lad, as winner of 19 Grade One races, is guaranteed more than a mention whenever there’s talk of the great hurdlers.

* The build-up to Cheltenham is well underway, and, as always, Inside Track will be keeping an ear to the ground. One that has already been spoken about is The Tullow Tank, named after rugby International, Sean O’Brien.