Kenny can’t wait to get his hands on Sam 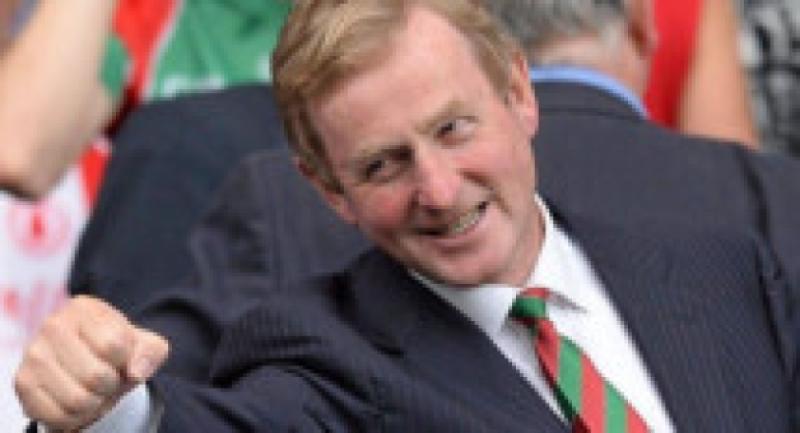 Enda Kenny is as near to a GAA football fanatic as makes no difference. No surprise in that. He played the game, while his father, Bill, won an All-Ireland medal, lining out on the 40 in Mayo’s defeat of Louth in 1950.

Enda Kenny is as near to a GAA football fanatic as makes no difference. No surprise in that. He played the game, while his father, Bill, won an All-Ireland medal, lining out on the 40 in Mayo’s defeat of Louth in 1950.

No, it wasn’t Bill who over-carried the ball before Joe Sheridan-ing it to the back of the net late on for that game’s vital goal. Someone else. (Just thinking: had Mayo not come out the following year to retain the title, we here in this county could claim the Westerners much-talked-about barren spell of the last 60-odd years was as a result of the injustice of their win on the third Sunday in September, 1950.)

Enda’s been seen at Croke Park a lot lately, and hasn’t been afraid to wear his colours. He donned a snazzy red-and-green tie on the day of the semi-final, and might, just might, go for something more garish for the final – a rosette, perhaps, or a crepe paper hat with photos of players around the rim, the kind of thing that was popular when Mayo last won the title.

Now, let’s give a real mix to politics and sport. There have been more Fianna Fail taoisigh than those wearing the Fine Gael jersey, seven compared to five. And in terms of years in office, again FF is well out in front.

A number of the FF men had a big GAA connection. Jack Lynch was the most notable among them, the Corkman winning six All-Ireland medals. Charlie Haughey and Bertie Ahern shouted for the Dubs, and Brian Cowen and Albert Reynolds were no strangers to football pitches up and down the midlands during their terms in office.

Okay, so how many of those mentioned were on the throne, so to speak, to see their county’s captain being presented with the Sam Maguire?

You can rule out Cowen and Reynolds straight away. Cowen represented Laois-Offaly, and the first-mentioned of those counties has yet to win the title, while the third of Offaly’s wins came before the man from Clara entered national politics.

As for Longford-Roscommon, Longford have also got a duck egg after their name, and Reynolds was still in short trousers when Roscommon won their two titles in successive years in the mid-1940s.

So, what about Lynch, Haughey and Ahern? Surely, there’s a winner among that trio? Huh, huh. Lynch was unlucky to be only a matter of months out of office when Cork triumphed in 1973, and though Ahern was Taoiseach for almost 11 years, Dublin didn’t even make the final, never mind win it, during his term. Haughey had three spells in office, covering just over six years, but he, too, didn’t have the chance to milk the occasion.

The two other Fianna Fail taoisigh were Eamon de Valera and Sean Lemass. As he was born in New York and represented Clare, Dev never had much going for him. New York mightn’t even have been runners during his reign, while Clare, like Waterford, Tipperary and Limerick, have been long-time whipping boys for the big two in Munster, the Banner only twice winning the provincial title and never lifting the Sam Maguire. John O’Keeffe brought them to Croker after the second of those wins, in 1992, and they did alright, going down by five points to Dublin in a high-scoring match.

That leaves Sean Lemass. An FF winner at last, Dev’s successor sitting in the soft seats to see Des Foley being presented with the cup following Dublin’s 1963 defeat of Galway.

Now we’re on to Fine Gael. Notwithstanding his county’s defeat by Donegal last year, Enda Kenny has reason to be confident going into this year’s big match. If Mayo triumph, he will join the ranks of three of his predecessors as party leader and taoiseach who were there to cheer on their All-Ireland-winning county side.

He may not have be an avid football fan, but Garret Fitzgerald was captured on television in thrall as Dublin and Galway beat the lard out of each other in 1983, before the 12-man sky-blues scraped home with a couple of points to spare. John O’Leary was captain.

It wasn’t pretty, either, on the day Meath beat Mayo in the replay of the 1996 final, a mass brawl early in the game resulting in both sides being reduced to 14. Still, it would have pleased John Bruton to be close by as Jack Boothman handed over the trophy to Tommy Dowd.

And now to the most successful ‘All-Ireland’ taoiseach of them all. Liam Cosgrave might have been just four years in office, but during that time saw his native Dublin win the Sam Maguire twice, in 1974 and ‘76, and lose – to Kerry – in the ‘75 final. And had he clung on to office for a few more months, he’d have brought up the treble, in ‘77. His term ended in July of that year, just over two months before the Dubs routed Armagh.