MacRory programme a must for collectors 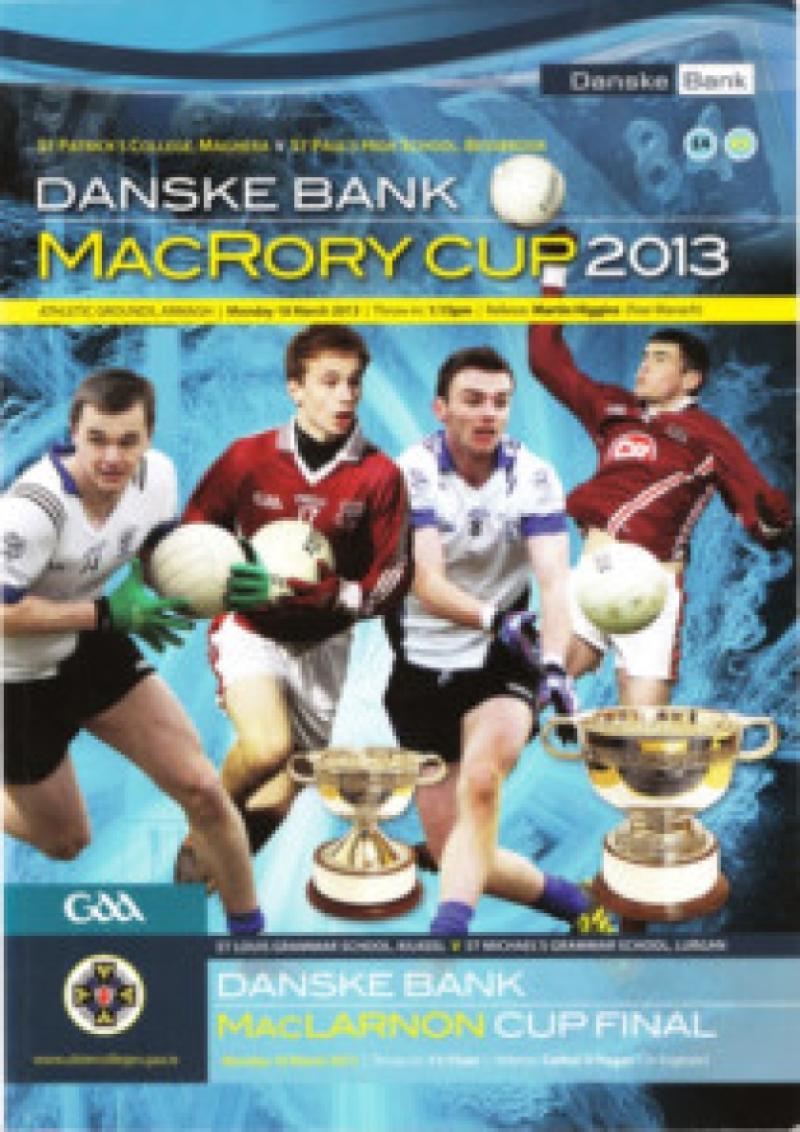 Match programmes don’t come much better than the one produced for the recent Ulster Colleges finals day at Armagh’s Athletic Grounds. If you’re a collector, get your hands on one.

Match programmes don’t come much better than the one produced for the recent Ulster Colleges finals day at Armagh’s Athletic Grounds. If you’re a collector, get your hands on one.

This is the biggest day in Ulster schools’ football, and this year the premier event, the MacRory Cup, had St Patrick’s, Maghera, taking on first-time finalists, St Paul’s, from Bessbrook. Also on the programme was the MacLarnon Cup decider, St Louis, Kilkeel, playing Lurgan’s St Michael’s.

The Dankse Bank is Ulster Colleges’ sponsor, and maybe that allowed the publishing committee to push out the boat. Their end-product was 96 pages of beautifully-produced pictures, along with articles, recent and past match reports, player profiles and rolls of honour. Printed on the very best of paper, it was on sale for St £4, or, a fiver in this side of the Border’s money. That levy, however, could only have gone part of the way towards the cost of the print run.

It was as recently as 2008 that St Paul’s played their first games in the Ulster Colleges. Their rise has been meteoric, a place in the MacLarnon Cup final in 2011, before taking the title 12 months later and then going on to win the Noonan Cup, the trophy that goes to the All-Ireland B winners.

A name familiar to Louth supporters was on the Paul’s line for the MacRory Cup final. Martin O’Rourke, brother of county team manager, Aidan, and one of his assistants, shared managerial duties with John Rafferty, and though their side narrowly failed to Maghera, the two lads would have seen the school’s involvement in the big day as a major advance. So, too, would school vice-principal, Jarlath Burns, the big man who was unfortunate that his outstanding career in the Armagh jersey ended just before the 2002 All-Ireland breakthrough.

Given the school’s growing student population and huge commitment to GAA it seems only a matter of time before Paul’s win the premier title, edging them up the Mourne and District pecking order where Newry’s St Colman’s and Abbey CBS have been dominant.

Dundalk’s Marist College was at one time a major force in the MacRory Cup, two wins – in 1938 and ‘41 – coming from a total of five appearances in the final, one of which was played at the now long-closed Athletic Grounds. The Marist was a boarding school at that time, and a number of its students were on Louth’s All-Ireland-winning minor teams of 1936 and ‘40. More recent finals were also played in Dundalk, at St Brigid’s Park, in 1967 and ‘72.

The MacLarnon Cup roll of honour shows that St Michael’s, Omeath, were winners in 1967, while Carrickmacross’ Patrician High took back-to-back titles in the late 1990s, and Castleblayney’s Our Lady’s won out in 2005.