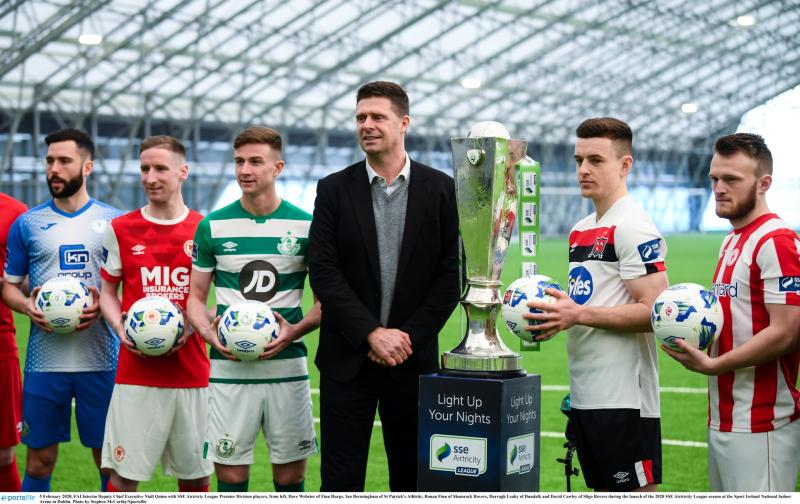 A lot has happened in the world of Irish soccer since Dundalk brought their 2019 season to a close, beating Linfield 6-0 in the second of two matches needed to decide the Unite the Union Cup. This was a maiden voyage for, what you might call, a teaser in the search for an all-island competition, bringing together the league champions from both sides of the border.

It was Dundalk’s fourth trophy-win of the season – had their Cup final with Shamrock Rovers brought a different result, there would have been an Oriel Park clean sweep. It was close at The Aviva, Rovers having to wait for a penalty shoot-out before claiming the winner.

If, at the time Linfield came to Oriel the FAI was tottering, its collapse since then was as inevitable as it was spectacular – spectacular if only for the size of the debt left behind, a figure well north of the €55 million first mentioned. The mystery is how such a sum was allowed to accumulate without someone among the blazers having the guts to stand up and say stop, there’s something terribly wrong going on here.

When it seemed the game might go under as a result, FIFA and the government, in conjunction with Abbotstown’s new faces, have come together to make sure that doesn’t happen. And among the new faces is one of the county’s most respected figures.

Niall Quinn, a veteran of two World Cup finals, was a goal-scoring hero on the football field; in his new role as FAI Deputy CEO off it he can steer the ship away from the choppy waters it’s been through in the last few years.

What’s certain, whatever crisis it might face in the future, the League of Ireland, which provides the full-time, genuine soccerfan, those who frequent Oriel Park and the grounds like it week after week with a staple diet, is never likely to be referred to as a “problem child” by the big Dubliner. You’d have to think he’d be in there working on a solution rather than resorting to name-calling.

Many of those responsible for bringing so many riches to Oriel in the past six seasons will again be lining out, hoping to bring a sixth league title this way in seven years. If there hasn’t been the same success in the Cup, competing centre stage on the domestic game’s biggest day on five occasions and winning the trophy twice is still, you’d have to say, a bit of alright.

Seán Gannon, Gary Rogers, Brian Gartland, Dane Massey, Chris Shields and Patrick Hoban are said by someone close to the scene to be as keen as ever, while Vinny Perth, fresh from his first award-winning season as manager, may have found a couple of good ‘uns in Greg Sloggett and Darragh Leahy. And if former Dundee player, Cammy Smith, has as much success as another who had a taste of Scottish football before coming to Oriel, one Stephen Kenny, he could prove to be the best buy of all.

Brian Gartland doesn’t need to have an ancestor buried in Castletown graveyard to have his Dundalk credentials questioned. He’s now well established here, and was never likely to have given substance to last year’s rumour that had him earmarked for a switch to St. Patrick’s, now in the care of his one-time Oriel colleague, Stephen O’Donnell. But Robbie Benson had his head turned. He should prove a good addition to the Inchicore team, which is forecast by some pundits to emerge as one of Dundalk’s strongest challengers.

Another who could cause problems is coming to town next Friday night for the league opener. The game with Derry City, captained by the much-travelled Cooley lad, Conor McCormack, has appetites whetted.