Jockey McCoy’s a stayer – and so too is big Paul 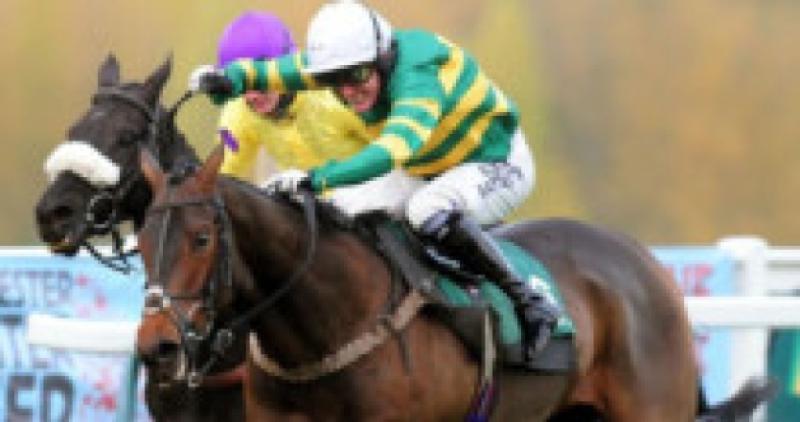 One of them is from Armagh, the other from Antrim. Paul Hearty, the Appleman who is a Gaelic football goalie, stands at 6’ 4” and weighs a lot; Tony McCoy, from up near The Glens, is 5ft-something, and when it’s absolutely necessary, can get down to just over 10st to ride in a National Hunt race.

One of them is from Armagh, the other from Antrim. Paul Hearty, the Appleman who is a Gaelic football goalie, stands at 6’ 4” and weighs a lot; Tony McCoy, from up near The Glens, is 5ft-something, and when it’s absolutely necessary, can get down to just over 10st to ride in a National Hunt race.

Two from different sports with physiques that don’t match. What they have in common, however, is that both are winners, big, big winners, with an insatiable appetite for success. In 1995, each scored a significant first win.

McCoy was big news last week. In getting Mountain Tunes up right on the line in the 3.10 at Chepstow on Thursday, this most driven of sportsmen reached a milestone with 4,000 written on it. That’s the record number of winners he’s ridden in a career that began when he joined Jim Bolger’s Carlow yard as an apprentice a couple of decades ago. And included are the winners of National Hunt’s greatest races, the likes of the Aintree Grand National and Cheltenham’s Gold Cup and Champion Hurdle. You don’t have to be an avid racing fan to appreciate the magnitude of his achievement.

McCoy has been British Champion Jockey for the last 18 seasons. The first title came his way in 1995, when he rode 182 winners; in his best-ever season he broke the record held by Gordon Richards, the famous Flat jockey, by booting home 289 in front.

It was also in 1985 when Paul Hearty won the first of his Armagh senior championships. Since then the big Crossmaglen Rangers man has added 16 more to his collection, the most recent of them coming a few weeks ago. If that doesn’t make him a man apart in Gaelic football, he can always bolster his claim by putting the 10 medals he won at provincial level on show. And how about the six he collected when Rangers moved on to the All-Ireland stage?

Will we ever see the likes of these great achievers again? Actually, yes. Neither is planning to give up just yet.

Although nearing his 40th year, McCoy plans to continue his relentless pursuit of winners. The champagne corks may have popped at the Welsh course of Chepstow, but teetotal AP wasn’t having any of the bottle’s contents. On the following day he was at Soutwell, taking a single mount - and he was at Navan on Sunday.

While McCoy was donning the famous JP McManus silks, Paul Hearty was out in Crossmaglen’s equally famous black-and-amber, hoping to make progress in the Ulster Championship. It didn’t work out; Down champions, Kilcoo, proved too good for the Armagh champions, winning easily in extra-time.

But there’s always next year for the big man, and maybe the year after. In the year that Tony McCoy, one of the greats of National Hunt racing, became British Champion Jockey for the first time, Paul Hearty set out on a winning road that would earn him rewards unheard of in Gaelic football.