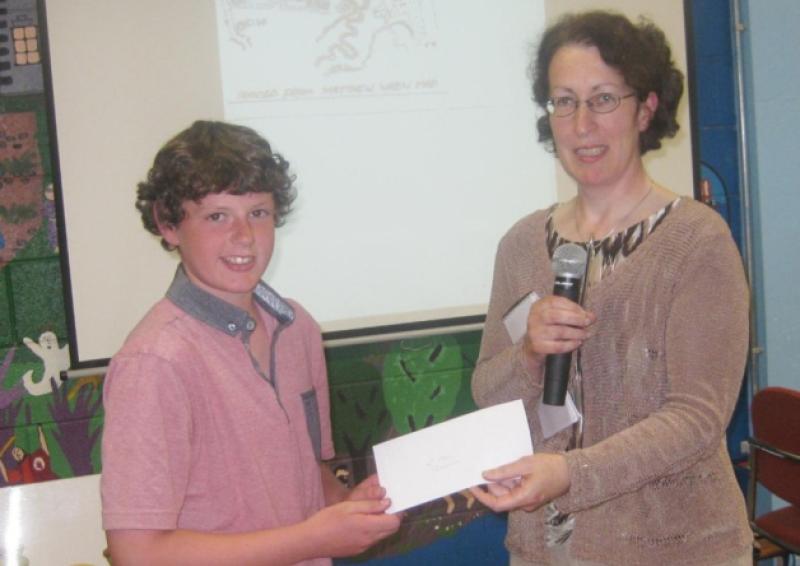 large crowd of children, parents, grandparents and teachers from Darver and Dromiskin attended the local Historical Society’s award ceremony for their Tales from my Grandparents’ Time essay competition. Pupils from 5th and 6th classes, in both schools, entered many, interesting, poignant and often witty accounts of times gone by. A selection of these were expertly read out by the children and thoroughly enjoyed by those present. The class winners received lovely prizes from Patricia Kirk, Chairperson, Darver, Dromiskin Historical Society. Patricia hoped that children talking and listening to their grandparents would spark a life long interest in History and perhaps recruit new members for the society!.

A lovely evening was finished off with refreshments for all. Well done to the organisers.

Pictured are the prize winners from both schools with Patricia Kirk:

In February, as part of their programme of events for Catholic Schools’ Week, sixth class at St Peter’s and their teacher Liz Keane O’Hagan, hosted a Grandparents’ Day in their classroom.

This was also a day for reminiscing, sharing memories and looking at old memorabilia.

Most of all it was a celebration of the wonderful bond that exists between children and their precious grandparents.

On Monday last the official launch of Dreamtime Garden took place in the school grounds.

The manager of this project is Dr Pamela Whitaker from Groundswell and initially it was conceived as an “Edible Forest Garden” with most of the plants/trees producing edible fruits, nuts and leaves. However with the incorporation of the features of the local Celtic Cross and the monastic arch into the design it began to take on a more contemplative vibe. This theme was further enhanced with a number of Seamus McArdle creations. More next week.