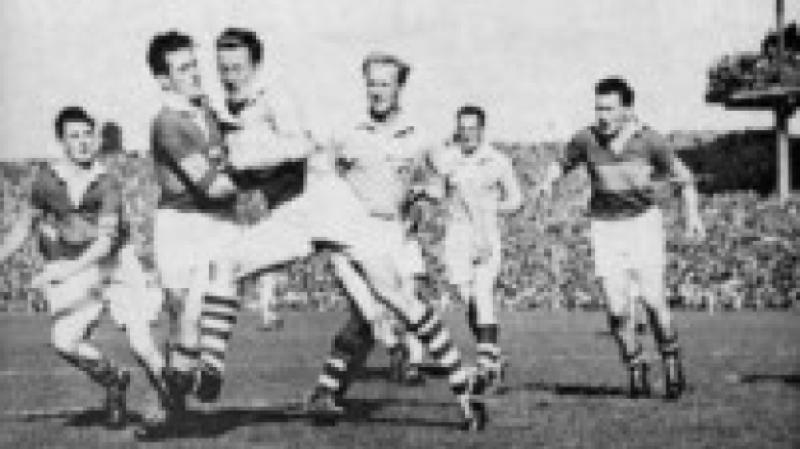 While the debate on the choice of Limerick’s Gaelic Grounds as the venue for the Kerry/Mayo replay raged, a letter-writer to a daily paper asked why, in the event of the other semi-final ending in a draw, the two replays couldn’t be played together on the same day.

While the debate on the choice of Limerick’s Gaelic Grounds as the venue for the Kerry/Mayo replay raged, a letter-writer to a daily paper asked why, in the event of the other semi-final ending in a draw, the two replays couldn’t be played together on the same day.

He went on to suggest it had never happened before, the two semis finishing level. Well, it did, in 1955, and, ironically, the letter-writer’s county, Mayo, was one of the teams involved. And, yes, the two replays took place on the same day.

Though almost six decades years have passed since then, I can remember the semi-final in which Mayo drew. They played Dublin, and although still to reach my teens, I was there, taken along with a sibling by my father.

Eamon Mongey stood out for Mayo more than any of his colleagues, perhaps because he was bald. And as my father’s next choice after Louth would have been the Dubs, we’d have been told to watch out for the likes of Heffernan, and Freaney, and ‘Snitchie’ Ferguson.

I can’t remember much about the game, but what’s still vivid in my memory are the conditions in which it was played. It poured out of the heavens from start to finish, and being among the many thousands on the Canal End, we couldn’t avoid getting soaked to the skin. I’m reminded of how we felt by the ice bucket challenges currently taking place. But at least the volunteers can get a quick drying off and a change of clothes; we had still a train journey to face when the game was over.

I researched the semi-finals and found that the game we were at ended Dublin 0-7, Mayo 1-4, the scoreline reflective, perhaps, of the conditions. The other game ended with Kerry on 2-10 and Cavan on 1-13.

A crowd of a little over 71,000 turned up for the replay fixture, and this time Kerry had it all their own way, winning by 4-7 to 0-5. But the other game was another tight affair, Dublin making it by just a point, 1-8 to 1-7. Jimmy Curran was outstanding for Mayo, accounting for all of his side’s scores.

The crowd for the All-Ireland final was a record at the time, 87,102, and they saw Kerry win by 0-12 to 1-6, the goal falling to Ollie Freaney, who somehow managed to find a way past through a crowded Kerry goal-line with a 14-yard free coming towards the end.