DkIT reaches out to the local sport community 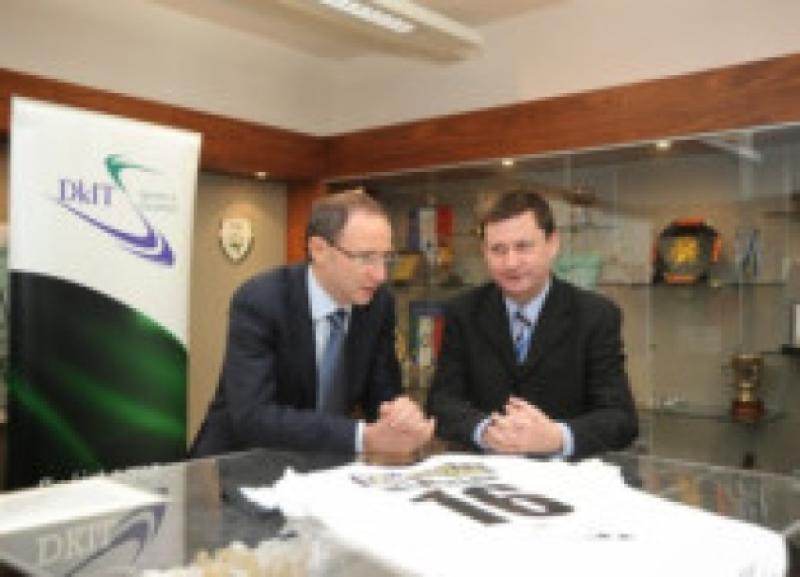 Dundalk Institute of Technology can’t be accused of not reaching out to the local sports community. It has recently forged links with soccer and cycling’s governing bodies; for a long time the prospects of a long-lasting association with the GAA looked assured.

Dundalk Institute of Technology can’t be accused of not reaching out to the local sports community. It has recently forged links with soccer and cycling’s governing bodies; for a long time the prospects of a long-lasting association with the GAA looked assured.

When it seemed everything was in readiness for a major link-up between the college, Croke Park and Louth Co Board, the triumvirate to provide Louth with a county grounds worthy of the name, the plug was pulled.

Originally priced at around €6m, the cost of building the stadium on the college’s grounds capable of accommodating a crowd of 12,000, four thousand of them seated, is said to have spiralled to a height that put the Co Board’s expected contribution to the project way beyond what it would be capable of raising.

The Board has since turned its attention back to Drogheda Gaelic Grounds, which has the name of a county grounds, but is in serious need of development to bring it up to the required standard.

In the meantime, DkIT has teamed up with Dundalk FC to launch a Soccer Scholarship Academy, which is to provide Third Level scholarships for the college’s students with an attachment to the Carrick Road-based club.

The scheme is aimed at those in Third Level education who wish to pursue a soccer-playing career at the highest level in Ireland. Each year four scholarships will be offered to Leaving Certificate and mature students. Come the new soccer season, the DkIT logo will be carried on the Dundalk jerseys.

The college’s purchase of the former JJB complex, due to open in September, will provide top-class gym facilities for the scholarship-holders and, indeed, students involved in other sports. If everything goes to plan, it will also house the country’s first indoor velodrome.

The provision of such a facility has been the ambition of the very progressive Cuchulainn Cycling Club for some time. Now that it has joined forces with DkIT, the prospects of it happening are real.

The local outfit, under the astute chairmanship of Pat O’Shaughnessy, has more than one spoke in its wheel, so to speak. Come May, it is to play a major part in facilitating a stage of the Giro d’Italia on its way through Dundalk.

The cost of the velodrome project has been put at €1.2m, and O’Shaughnessy is confident funding can be secured, soon enough to have the track up and running to coincide with the JJB opening.

And if that were to happen, wouldn’t it be one in the eye for the sports governing body, Cycling Ireland, which has long had hopes of building such a facility, but as of now has failed in its efforts. It is presently looking towards the controversial Abbotstown centre, but might, just might, abandon these plans if the Cuchulainn project materialises.

One of DkIT’s finest promotions has been its staging of the Sigerson Cup finals ten years ago. It has always had strong links with the GAA, and it’s unlikely they’re ever going to be broken.