Award for Peter – and reward yet again for Lynch horse's followers 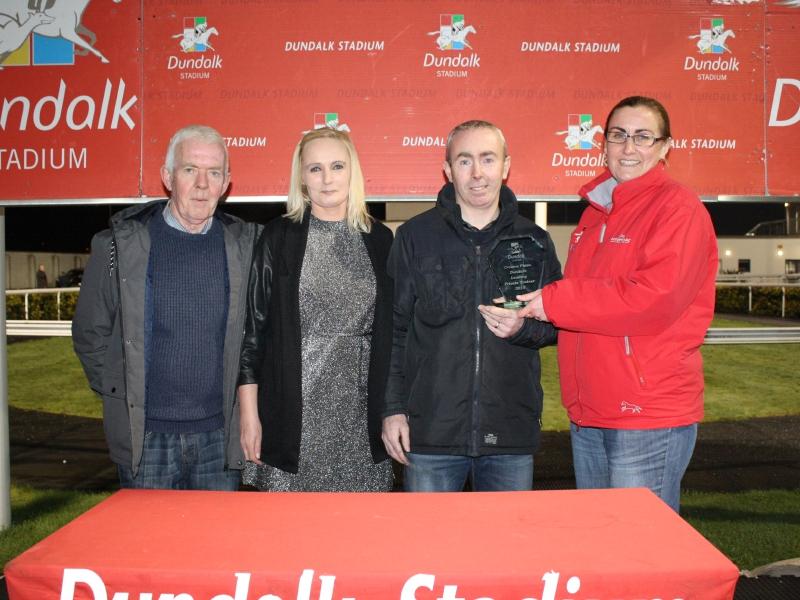 There were rich pickings for locals as Dundalk Stadium played host to the two sports regularly practised there, last Friday night.

The session kicked off with horse racing, and as happened quite often last season, Political Policy got among the winners.

As those who comprise Inside Track’s regular readership – the writer’s family, friends and those who pass their time going through newspapers for typos, dodgy grammar and the like – will be aware, Political Policy is owned by All-Ireland footballer, Frank Lynch, and since joining Gavin Cromwell’s Co Meath stable has been a revelation, winning race after race.

It’s like this: you meet someone you know at the track, and invariably will ask, or be asked, “Did you back Lynch’s horse tonight.” Those who did would have latched on to the the handsome bay at the very beginning, and having struck then would have stayed loyal. They’d be a fair few quids in, because in running up a magnificent sequence, Political Policy rarely, if ever was favourite - 6/1, for instance, on his latest outing.

The punters who didn’t row in would be those who missed out the first night, and feeling they were somehow jinxed, kept their money in their pockets, or maybe back something else, on each of the horse’s subsequent outings.

Anyhow, Political Policy has made a flying start to the new season, running over the Derby distance of one-and-a-half miles for the first time. He’s taken an enormous hike in weights, yet continues to defy the handicapper. Tremendous credit is due to trainer Cromwell.

Another trainer - this one puts greyhounds, not horses, through their paces – also had a fine 2015.

Peter Noone has his kennels in the shadow of Sliabh na Gloch on the Cooley Peninsula, and by amassing 37 winners won the title of Dundalk’s leading private trainer.

He was presented with his award during racing.