INTERVIEW: Willie Mullins is all about 'team' wins ahead of Punchestown 2022 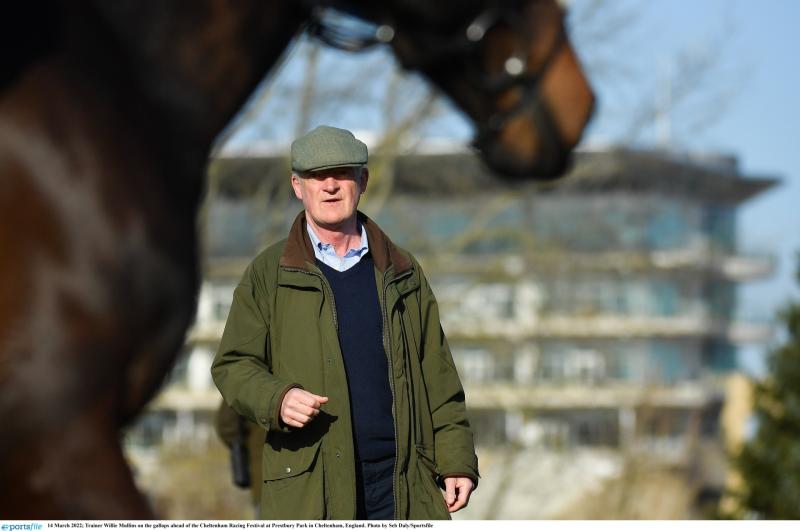 The recent success of jump racing’s king is well documented, and so it should be. But there are always breakout moments in the past for any prominent figures of today.

Unsurprisingly given what was to come, for Willie Mullins that moment came in Cheltenham and the 1996 bumper.

“He won the bumper and it changed our careers. We bought a horse at the sales, brought him the whole way through his career and on to win in Cheltenham. It made a huge difference to the type of investment that people were willing to put into the yard because they saw what we could do. That was a watershed moment for training in Closutton” Willie explained.

Willie now holds the record for the most winners at the Cheltenham festival, a staggering 88. Alongside that stellar record comes an enormous weight of expectation from the crowds watching in Prestbury Park and around the world.

“There's a lot of pressure bringing the type of team that we bring to Cheltenham, we bring 60 plus horses. We don't make them favourite, the public does and sometimes the public gets it wrong. That's why bookmakers drive bigger cars than we do,” Willie laughed.

“The expectation nowadays that we have, we could have eight or 10 favourites and everyone expects eight or 10 winners which is really unrealistic, until what happened this year.”

Day four of Cheltenham 2022 brought about an unprecedented event.

Willie Mullins and his team entered Friday’s race day with five winners, a great haul for any trainer, and finished proceedings with five more.

The day was kicked off by Vauban delighting punters by cruising home in the Triumph Hurdle. But by the time Elimay and Mark Walsh crossed the finish line to give Willie his record-breaking 10th winner of the festival and fifth of the day even the champion trainer and his team could scarcely believe it.

“It was just surreal. We were just sort of looking at each other pinching ourselves wondering if this is really happening.

“You couldn't dream of having a five-timer in a championship meeting like Cheltenham. You’d be going into the festival that you would have five winners in the week and that would be a good return. What happened on that Friday was absolutely extraordinary.”

But before the greatest day four any trainer has seen at Cheltenham happened, it was a day of frustration for Willie over the years. The showpiece event on the final day, the Gold Cup, had eluded him.

“I had sort of resigned myself to never winning the Gold Cup. These things happen and sometimes the best footballers don't win a World Cup or Champions league medal and that's how it is.” Willie said.

“We finished second six times. Then when we didn't get On His Own’s Gold Cup in the steward’s room when to me it was an open and shut case, I said maybe it’s not to be.”

The stewards enquiry in question was in 2014, the ruling went in favour of Lord Windermere despite interference and Willie thought his team’s Gold Cup day might never come.

But it did. And when Willie told this writer the story of Al Boum Photo in 2019, he did it with a tone that can only be likened to a sense he can still feel that weight being lifted off his shoulders.

“I thought the line was never going to come. Every time my eye was on Paul and Al Boum Photo I could see how well they were travelling. He crossed the line and it was more relief than jubilation. The frustration of all the other years had passed by, it was just pure relief,” Willie said.

Willie has built many successful partnerships over the years. But one of the most fruitful relationships between any trainer and jockey links Willie with Ruby Walsh. The head of Closutton still remembers the day he knew the jockey from Kill was destined for success in National hunt racing.

“One day in Leopardstown I was supposed to be riding a difficult four year old. I felt hungry during the day and went to go for something to eat so I had to look around for someone because I couldn't do the weight then,” Willie recalled.

“I met Ted (Walsh) and I asked was Ruby around, he had only ridden his first winner maybe a few weeks previous. He rode this really difficult mare and won on her. I just said to myself that’s the future, this young kid is the future. I was giving it up soon and I got Ruby down to start working for us and got him to work his way into being our leading amateur and on to professional.”

When reflecting on his successes Willie uses one word repeatedly, “we”.

As he looked back on the glories of his recent Punchestown exploits, in particular when he and son Patrick combined for the 2017 Champion Hurdle, he displayed his appreciation for the team that he has around him.

“Any time that Patrick rides a winner it is that bit more special. We really enjoy those days. But having everyone, my wife Jackie, Patrick, David Casey, Ruby Walsh and all the team at home makes it all very special,” Willie said.

“You can't buy those types of people. They have all those years of racing experience with us in the yard.

“I’d say that if I left this establishment in the morning they would just take over and having a team like that makes you so much more successful. It is a pleasure to make them part of a winning team, it makes it so much more enjoyable.”