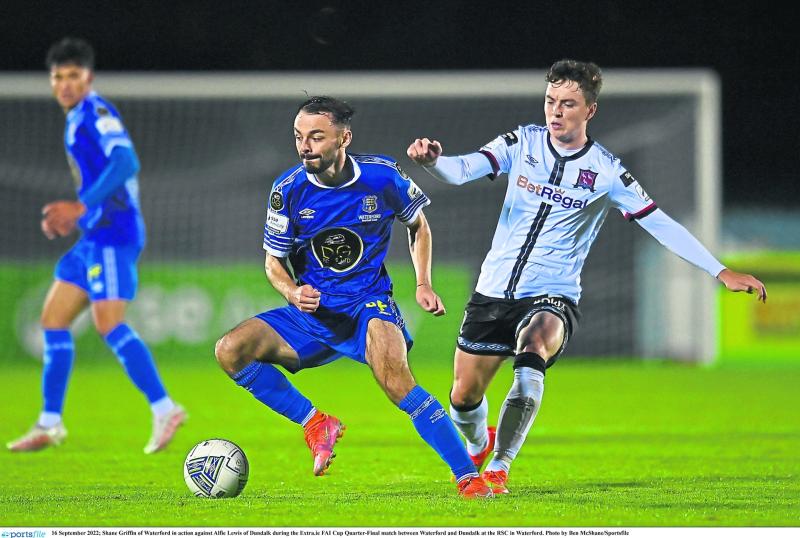 Shane Griffin of Waterford in action against Alfie Lewis of Dundalk during the Extra.ie FAI Cup Quarter-Final match between Waterford and Dundalk at the RSC in Waterford. Photos by Ben McShane/Sportsf

Not since an infamous defeat at non-league Portmarnock in 2001 had Dundalk FC been eliminated from the FAI Cup by a team playing outside of Premier Division football.

Friday’s loss in Waterford didn’t quite generate the same level of shockwaves felt around Dundalk some 21 years ago, as not only are The Blues currently flying high in the First Division, they also disposed of holders St Patrick’s Athletic in the first round.

Make no mistake, Waterford were fully deserving of their 3-2 scalp against a predictably lacklustre Dundalk, as they made their way into the semi-finals of the Extra.ie FAI Cup.

In fortuitous circumstances, Paul Doyle made it a dream start for Dundalk, but goals from Shane Griffin, Darragh Power and Phoenix Patterson put Waterford 3-1 ahead.

Keith Ward gave The Lilywhites a glimmer of hope late on, but it wasn’t enough, as they failed to reach the semi-final stage of the competition for the first time in eight years.

“We’re bitterly disappointed,” head coach Stephen O’Donnell said afterwards. “You take the lead in the game, it happened last week. We took the lead twice in games we should be winning and we just haven’t hammered it home then.

Things were looking good for Dundalk early on, and they hit the front on 11 minutes, when Doyle’s speculative shot from range was tipped onto the crossbar by Paul Martin, but unfortunately for the Waterford goalkeeper, it somehow crept into his net after that.

Steven Bradley could have doubled Dundalk’s lead after he dispossessed Power, but just as the Scotsman was about to pull the trigger, he was brilliantly foiled by Paul Martin.

Waterford started to grow into the game after that though, and Patterson saw his curling effort veer off target, but that wasn’t long before the First Division side levelled matters.

That was on 31 minutes, when Wassim Aouachria’s cross from the right was only half-cleared by Greg Sloggett, and into the path of the inrushing Griffin, whose first-time shot from outside the box rifled into the bottom right-hand corner, beating Nathan Shepperd.

Doyle picked up an injury and had to be replaced by Sam Bone, who committed a cynical foul on Patterson, whose subsequent free-kick delivery from the left was knocked down at the back post by Kilian Cantwell before Power finished from close range to make it 2-1.

Reeling from that concession two minutes before the half-time break, Dundalk sought an equaliser after the restart, with Bone’s drilled shot going a mere inches wide of the post.

Waterford had chances to double their cushion after that, though, with Patterson, Griffin and then Patterson again seeing attempts go off target in what was an encouraging spell.

After being picked out by Alfie Lewis, John Martin couldn’t get the better of his twin brother in the Waterford goal, not long before Bradley’s effort sailed wide of the mark.

The Blues then made it 3-1 on 65 minutes, when after Roland Idowu had dispossessed Bradley in the centre of the pitch, the outstanding Patterson cut inside the challenge of Lewis Macari, before curling a goal-of-the-season contender right into the top corner.

Dundalk had no way back after that, and if anything, Waterford could have even added a fourth, with Junior Quitirna curling a shot which forced Shepperd into a decent save.

Bone’s attempt at a headed clearance only served to send Junior through on goal, and he looked set to make it four, only for the intervention of Shepperd, who saved with his feet.

At the other end, Bradley’s cross was headed into the path of Lewis by Runar Hauge, but the English midfielder volleyed miles over the crossbar, summing up Dundalk’s night.
W

ard’s goal in stoppage-time from an Andy Boyle assist did offer some hope, but they couldn’t fashion another opening afterwards, as they came crashing out of the FAI Cup.