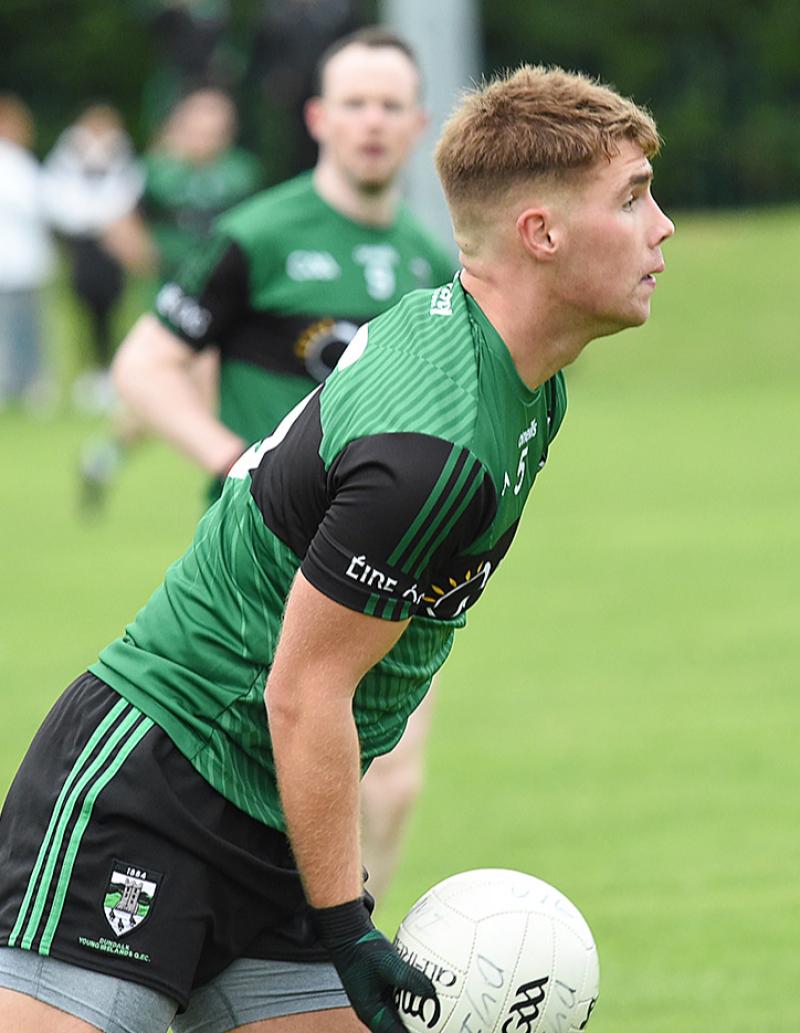 For the first time since they entered the Intermediate grade in 2017, St Kevins have booked their place in the IFC semi-finals following a hard fought victory over Dundalk Young Irelands under lights in Stabannon on Saturday night.

The Phillipstown men edged it overall, leading by double scores at the break, with Lee Crosbie, TJ Doheny and Cameron Maher all converting with style from place kicks at different stages.

However, a second half penalty from Peter McStravick brough the Dundalk Young Irelands roaring back into the contest with that typical fervour of defiance.

Despite the reputation that both sides adopt somewhat defensive strategies, the first half was a fairly open encounter, which saw St Kevins raise the first three white flags of the game.

TJ Doheny converted a ’45, before a Lee Crosbie brace had Thomas Mac Namee’s side 0-3 to no score ahead inside 9 minutes.
Lee Crosbie’s free came after corner back Shane Meade was fouled, who was a constant thorn in the Young Ireland’s side with his incisive running forward and willingness to break the lines with his searing pace.

The Kevins allowed the Young Irelands to take their kickouts short, before forcing the turnover and breaking with pace and numbers, with 0-5 of their 0-9 coming from such turnovers.

Along with Shane Meade, the Crosbie and Maher brothers also caught the eye, Seanie, Lee and goalkeeper Danny Crosbie all impressing.

At the other end, Young Irelands struggled to find the range, with Adrian O’Donoghue’s side missing frees, to go with their general wastefulness from play.

The Dundalk side only managed 0-3 from 13 shots in that period. However, a terrific kick from distance by Ruairi Kelly had them off the mark in the 10th minute, after being set up by Jordan O’Donoghue.

A Cameron Maher free restored the Kevins lead, before an incisive Dean Maguire foot pass found Cian O’Donoghue who converted from play, leaving it at 0-4 to 0-2 in the Kevins favour after 12 minutes.

Jordan O’Donoghue did find the range from play to close the gap to a single score. But the Kevins kicked into gear, scoring the next five points without reply to take a six point lead into the break.

Dundalk Young Irelands were largely second best and needed a draw on all their reserves to find a way back into the tie, and so they did.

Following several positional switches, Young Irelands’ forward Cathal Ferriter, who was getting no change out of St Kevins’ Finbarr Lynch in the first half, found himself marked by Cameron Maher.

It was Cameron Maher who was adjudged to have fouled Ferriter in the area, with referee Cormac Reilly awarding the Dundalk side a penalty.

Peter McStravick made no mistake with the penalty, which was quickly followed by a Cian O’Donoghue effort from a difficult angle, met by a roar and punches in the air from players and supporters alike, who smelt blood.

The Kevins seemed rocked, however that is when you find out about leaders, and Seanie Crosbie displayed superb leadership, after a magnificent pluck from his brother Danny’s kickout, just when they needed it. Crosbie finished with 34 possessions over the hour, with Cameron Maher having 33.

Despite being wasteful themselves in the second half, a wonderful Finbarr Lynch turnover ended in Lee Crosbie kicking a terrific point from distance to stretch the Kevins lead to four, at 0-11 to 1-4 with 11 minutes left.

A Jordan O’Donoghue free and a first score from play for Ferriter set up a grandstand finish, with just two points separating the sides.

But despite the second half revival, the Kevins just held on as they managed to come out of several rucks around their own full back line with the ball, as they secured a semi-final spot for the first time since winning the Junior Championship in 2016.