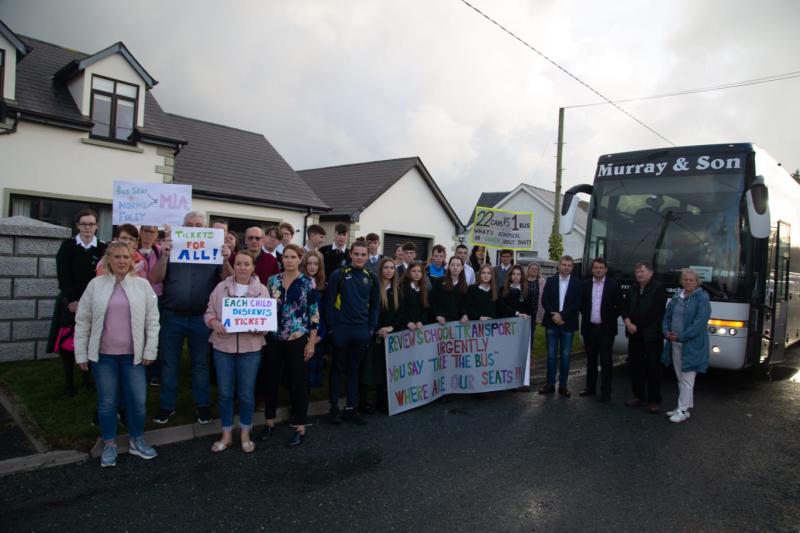 Parents of secondary school students in Annagassan have hit out at the lack of concessionary bus tickets issued to children in the area for the coming school year.

One parent told the Democrat that up to seventeen secondary school students in the community who go to school in Dundalk have been left at the school bus stop in Annagassan most mornings as buses with empty seats pull away.

Local parents believe this to be the result of Bus Eireann and the Department of Education failing to prepare for the inevitable increase in demand for tickets as a result of the government's announcement to waive school transport fees earlier in the summer.

Students who attend school in Dundalk were not considered eligible for a guaranteed bus seat because they were not attending their nearest school.

Lorraine Boyle, whose son goes to school in Dundalk, told the Democrat that families who have paid for concessionary tickets for a number of years have now been left stranded by the national bus carrier.

“For the last number of years there have been two school buses dedicated to the schools in Dundalk leaving Annagassan every morning.

“We’re in the catchment area for Dunleer school, which means the only school we really have a choice to send our kids to is Dunleer, an awful lot of us have chosen not to do that for various reasons, each family has their own reasons.

“So other years we would have gotten a concessionary ticket for the bus and we would have paid for that and were happy to pay for it.

“I’ve done that for about twelve years with my kids and have had no issue until about three years ago and then people were refused seats, last year was worse, and now this year has just gone beyond a joke.”

Families have been told by Bus Eireann that the company has been contracted by the Department of Education to provide transport to various different schools and that they give them certain criteria to fill.

For instance children sent to Church of Ireland schools like the Grammar have to be brought to school so they get preference.
The same is true for Gaelscoils and people within certain catchment areas to certain schools.

Currently Bus Eireann's position is that all seats have been allocated but the parents say that each morning they can see a number of seats are left empty with many believing that this is down to people availing of the free tickets announced earlier this year but not actually using them.

“Our major issue is that Bus Eireaan will not revisit this issue,” she says.

“Bus Eireann will not investigate why this is, they have just washed their hands of it for the year, and tough luck to any of us who didn’t get seats.

Parents like Lorraine have been forced to make what is an hour and a half round trip each morning and evening to drop their kids off, something they say is not sustainable as many work and if the situation became permanent would have to cut back on their hours.

The manner in which the news that some families would not be receiving tickets has also been criticised with Lorraine and others receiving an email at 8:30pm on the Friday before schools went back informing them they would not be getting a ticket.

“We can’t get through to Bus Eireann, you ring the helplines and you get an office in Dublin who say they’ll contact Dundalk for us then you get an email from Dundalk saying that there’s no seats available.

“If the kids were to use the public services bus they would need to then get from the middle of town to places like the De La Salle and the Louis which is going to mean they’d be late for school that’s the kind of pressure children and parents are under.”

The parents are calling on Bus Eireann and the Department to try and find a solution and investigate why there are so many empty seats on buses leaving the village each morning.