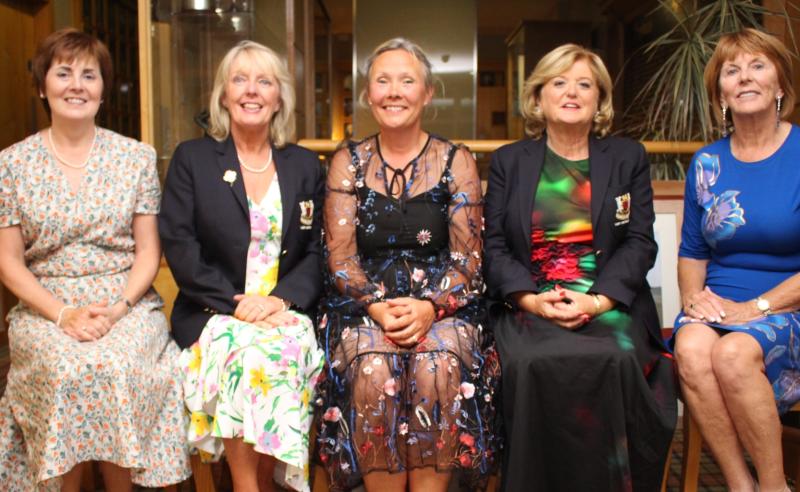 The overall prize-winners in the Lady President’s Prize at Dundalk Golf Club, pose for a picture alongside President Mary Dooley

Niall Sloane won the Deluxe Bathrooms Open Singles Stableford competition with an impressive score of 44pts to win by one stroke from Ciaran Cooney.

Playing off 36, Sloane picked up four points at the fifth, seventh and 18th and three points at six other holes as he went out in 24pts and returned in 20pts.

Cooney, who was off nine, had three birdies and 10 pars in an excellent round as he went out in 21pts and came home in 22pts. Frank Byrne (9), Laurence Soraghan (15) and John Englishby took the divisional honours.

With two rounds to go, Eamonn McEneaney is leading the IJM sponsored Golfer of the Year table by one shot from Pearse Murphy with Clem Walshe and Charlie Monahan five shots behind the leader.

Walshe leads the senior division with Sean Hession on top in the junior division. McEneaney leads the Intermediate section and Eoin Hamill is the Minor category leader. The top four in each division will play-off for the four IJM Scratch matchplay trophies next month.

Martina was the early leader and held onto top position to win by four shots from Teresa Matthews. Martina has been playing great golf in recent months and was clearly delighted to collect her beautiful prize from the Lady President.

This was a key event in the prestigious Golfer of the Year series, with only a further two events remaining. The gross prize was won by Pauline Campbell for the second consecutive year.

Divisional winners were Katie Rowland, Louise Lynn and Catherine Hogan Conlon with great scores of 72, 69 and 70 respectively. The Juvenile winner was Mia McDermott.

There was a very large turnout at the presentation on Tuesday evening in honour of the Lady President. Lady Captain Alison expressed the views of all members when she spoke of Lady President Mary’s dedication to the members of Dundalk Golf Club, her unending support and her friendship.

The Lady President was clearly delighted at such a successful event, thanking all members for their support and friendship.