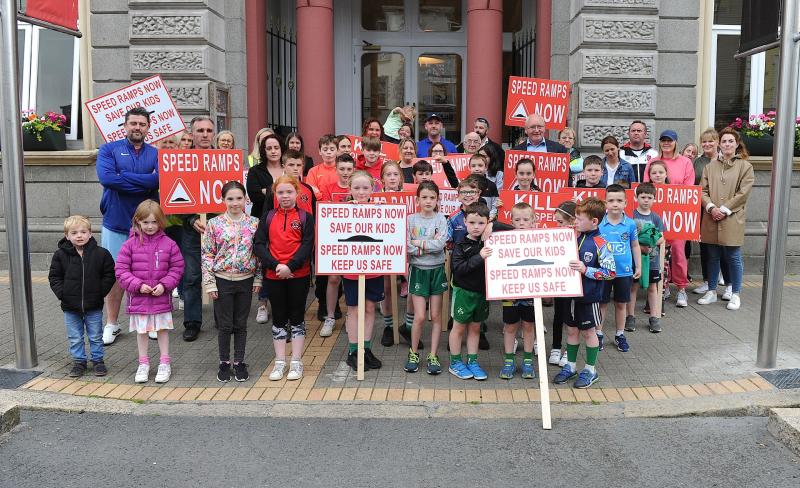 Members of the Bellurgan community stepped up their campaign for adequate traffic calming measures on the Dundalk to Carlingford R173 road at Bellurgan, with a protest at the Dundalk Town Hall on Tuesday.

The Dundalk Town Hall was the venue for the Dundalk Municipal District July meeting, with protesters taking the decision to hold their fourth public protest outside the Town Hall, ahead of the monthly meeting. Concerned parents and local residents, along with children, made their voices heard at the protest, which continued as the monthly meeting progressed. Chants of "we want ramps" from the protesters outside, could be heard inside the chamber while the meeting was taking place.

One resident told the Dundalk Democrat that the resurfacing of the road, which is set to take place, "will only increase the speed of the traffic coming into the Bellurgan stretch", if speed ramps are no installed on the roads. "The only thing we need at this stage is ramps, we've tried other measures."

He adds that other measures which have been put forward, including the narrowing of the road, with islands in the middle, will not be effective, "as they have not been effective in other places. The 50kph speed sign at Bellurgan which flashes as school times begin and end, has not been adhered to by drivers", he adds.

"We just feel at this stage that we have to bring it [the protest] to the next level, it's a pity we have to keep this momentum going for something that you feel would be on a regional road, and is on every other regional road, where there is a primary school."

Dundalk-Carlingford councillor, Antóin Watters, who has been working with the local community on the issue and was present at the protest, told the Dundalk Democrat that it was "great to see so many people here, considering it is the summer holidays. It just shows that this issue isn't going away. Unfortunately we had to escalate it further to before the council meeting. The community feels that this really is an issue that isn't going away. You can see people of all ages here who feel very strongly about this. The argument from the Bellurgan community is a very good one, they just need to get the similar traffic calming [measures] that are in other areas."

"It's a pity that this is what it's taking", he continues, "but it's not going away, we'll probably be looking to coming to the next full council meeting in two weeks at County Hall and we'll go from there, we'll probably get a few more people at that. The officials need to realise, we're not waiting for something bad to happen, we're trying to prevent something bad happening."

Cllr John Reilly, who was also present at the protest ahead of the monthly meeting, told the Dundalk Democrat that he thinks the protests could help convince the council executive that speed ramps are the option to go with for the road. "I think that when the executive see the strength of feeling in the Bellurgan area - it's a very emotive issue. It's safety at a school. It's a very wide stretch of road and a very fast stretch of road. Nearly every other school in the county has traffic calming measures. It's on a main road, it's the main artery heading out to Greenore, Carlingford, the port in Greenore, It's got a lot of heavy traffic on it, its got a lot of fast traffic on it, so I think the executive if Louth County Council will take heed."

The concerned community intends to continue their protest later this month to the County Hall in Dundalk, ahead of the Louth County Council July meeting, which is set to take place on Monday 18 July.