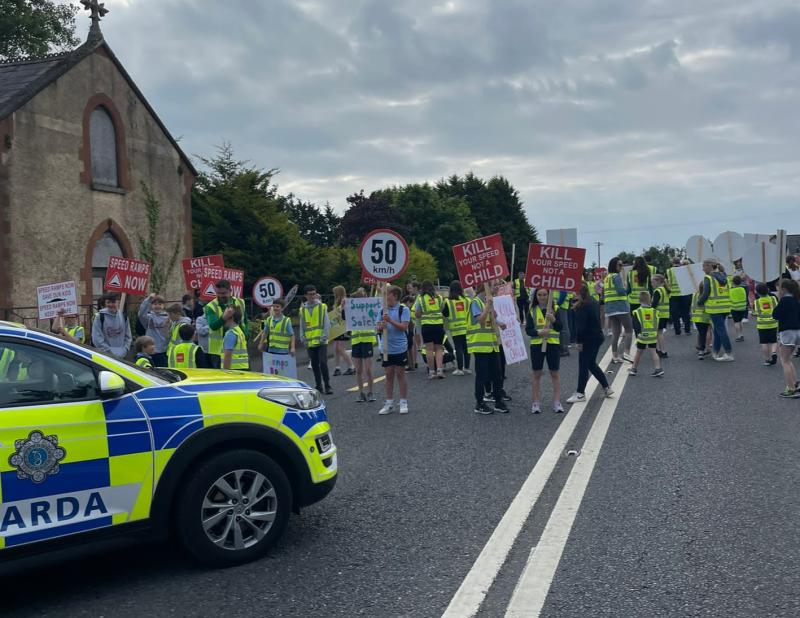 The Bellurgan community held a second protest last Thursday morning, calling for action on the high speed of traffic and the lack of adequate traffic calming measures on the Dundalk to Carlingford R173 road, which goes through the busy north Louth neighbourhood.

Last Thursday saw an increased level of protest with children and adults from the locality march on the main road itself to try and get their message across and see action taken. An Garda Síochána were also present again to help ensure the protest was carried out safely. The Dundalk to Carlingford road was blocked off for a time by children and adults, who marched from Bellurgan FC down to the Little Nippers playschool and back, and then into the national school.

Although the protest caused tailbacks while the protest was ongoing, there was support from many of the motorists who beeped their horns in support when they did pass.

Local councillor Antóin Watters told the Dundalk Democrat that was very happy with the turnout to the protest and said that he hopes that "it will be heeded now. This is not something that we want to do but unfortunately we feel it's a necessary step to get safety measures in this area".

Cllr Watters believes that ramps, which are present further up the road at Lordship and don't "reduce travel time by much at all", would reduce the speed on the road at Bellurgan as they do at Lordship. He says that "we're not trying to get anything different than what's in Lordship and other parts of the area." He added that on the N53 Castleblayney Road, "out beside the Greyacre Road; out in Kilcurry, Carlingford, Omeath, they're all there. It's just one more area that needs to be tackled."

The Dundalk-Carlingford councillor also stated that he was disappointed with the response from Director of Services Catherine Duff at the Louth County Council June meeting, who said that there no works planned for Bellurgan and that there were options other than ramps.

"I'm disappointed at the attitude the council are taking. It's welcome that they are resurfacing the road but in my mind that's only going to increase the problem in Bellurgan. It will increase speed. We're waiting too long to get the traffic calming measures put in place. This is something that should be done straight away. There is funding there for resurfacing the road, I'm sure they can muster up - speed bumps aren't dear, I'm sure they can get the money together to do it, especially for such a serious issue."

The community intend to continue their protest for another week, with a further protest planned, possibly for this Wednesday morning.