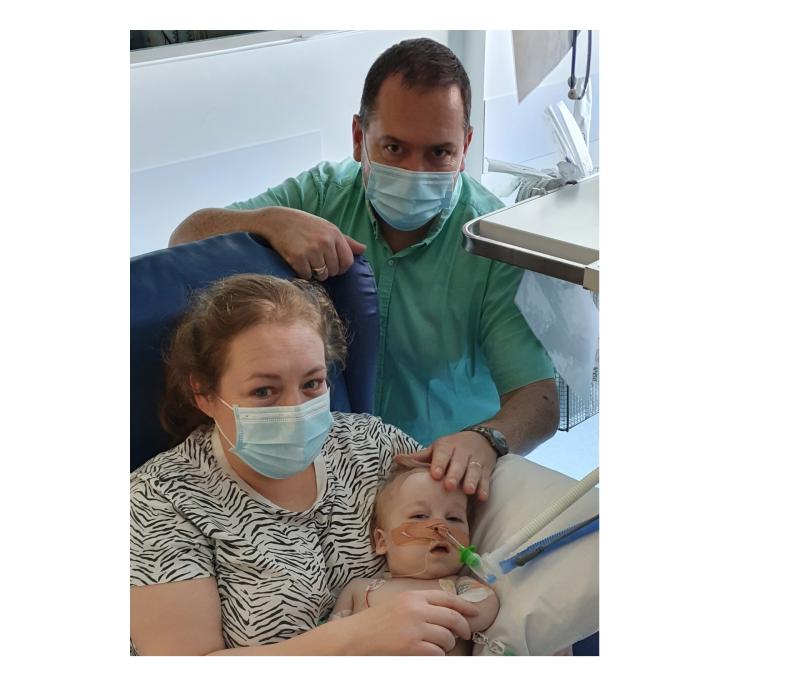 Little Nina with her parents Laura and Johnny

An appeal to help a family get a life saving heart transplant for their little girl has been made by the friends of Dundalk woman, Laura Holland, whose one year old daughter Nina, has been diagnosed with cardiomyopathy.
Nina's parents are to find out today (Tuesday) if she will be placed on the waiting list at the Cardiothoracic Unit at Freeman Hospital, in Newcastle in the United Kingdom.

Colleagues at Dundalk Institute of Technology, where Laura works, set up a GoFundMe appeal to help raise funds to go towards care of the brave young tot, as well as help support her parents, Laura and Johnny, who have had to relocate from Dundalk to Dublin, to be with their baby who is in Crumlin Children's Hospital.Laura told the Dundalk Democrat that they first found out that Nina had a problem with her heart at the 20 week scan.

“They transferred her to the Rotunda [Hospital] for the delivery because they knew she was going to need a pacemaker”, Laura explained. “She was born in the Rotunda and they took her over to Crumlin [Children's Hopsital] and she had a temporary pacemaker fitted on day one, and then on day five they put in the permanent one.”

Laura explained that Nina was in Crumlin Children's Hospital “for about four or five weeks and was then able to go home and was alright for a couple of weeks”, but then “she started getting sick and refusing to drink her bottle.” She was brought back to the hospital where an EMG tube was put down her nose. Courageous little Nina continued to get sick however and had to return to hosptial.

“We were in and out” of the hospital said Laura, as Nina “kept vomiting. You couldn't leave the house. We were housebound.”
“In January”, Laura goes on to say, “they decided they were going to try this tube, it goes in through the duodunem, so it bypasses the stomach. But it didn't take. She got very sick after that and they had to take it out and they put in a peg in her stomach. She was grand for about three weeks, there was no vomiting, and we thought, 'this is great now, she's cured. And then she got Covid. Don't know where Covid came from, and she was sick with Covid for about three weeks and then the vomiting just came back with a vengeance and she just kept vomiting.”

Laura said that a fundoplication was then carried out on Nina's stomach to stop the vomiting. “Its like they put a little knot in the top of the stomach so you can't physically get sick.” She adds however that Nina “just deteriorated after that and ended up in ICU, her heart just gave out basically. She's been in ICU since then.”

Testing was carried out on Nina to try and find out why her heart gave out, Laura explained, and it was found that the cause was genetic. They were told that “even if she didn't have the pacemaker fitted at birth, something would have happened to her heart at some point and the only treatment is [a heart] transplant.”

“They're telling us they had one child up in the ward waiting for four years for a transplant. We could be here for the long haul if we get her well enough.” Brave little Nina had just gone through a “wobbly weekend”, Laura adds, where she suffered an infection. “They thought it was her heart but luckily enough it's not.”

Nina has two young brothers who are missing their sister and their parents. “The two boys are missing us now. We were in the Ronald McDonald House and we thought we were going to be able to take them up, and then the Infection Control Team said she had a bug in her stool sample and we were put out of Ronald McDonald's. I don't think we can get back in there.” She continues, “the parent's accommodation, they have a couple of houses up here and they've offered us one, so we'll hopefully be getting the key to that this week and we'll be able to take the boys up. I haven't told the boys about it because they told us this past week and we're still waiting.

“So we're waiting for that, we're going to be getting called over to the UK – it's all up in the air, I don't know, we're just playing the waiting game to see what's going to happen. Tomorrow (Tuesday) is the big decision from the UK. Hopefully they'll say they'll put her on the transplant list. They reckon their waiting list could be six to 12 months for a new heart, but sure we know that there's people waiting years. We just have to try and keep her right. If a transplant becomes available and she has an infection, they can't do it, she'd be put back on the list again. So they have to find out what the infection is and treat her with the right stuff.

Nina's bravery through the ordeal is plain to see. “She's not giving up”, says Laura, “she's not giving up. They have her sedated there and she's still bouncing around the bed, she wants out of that bed. She wants that ventilator out. If she gets a chance she's grabbing at it.”

Laura says she is very grateful for the support they have received. “I would like to say thanks to all those who donated” she says. “We've had a lot of support, a lot of very generous family members and [from the] public. And thanks to the girls for setting it up for me. They had mentioned it to me a couplé of months back, and I said 'no no, these gofundme's are for people that are really sick' – little did I know I'd be needing them to set one up.”
You can support the fundraiser for Nina and her family by visiting https://gofund.me/41aa02b9