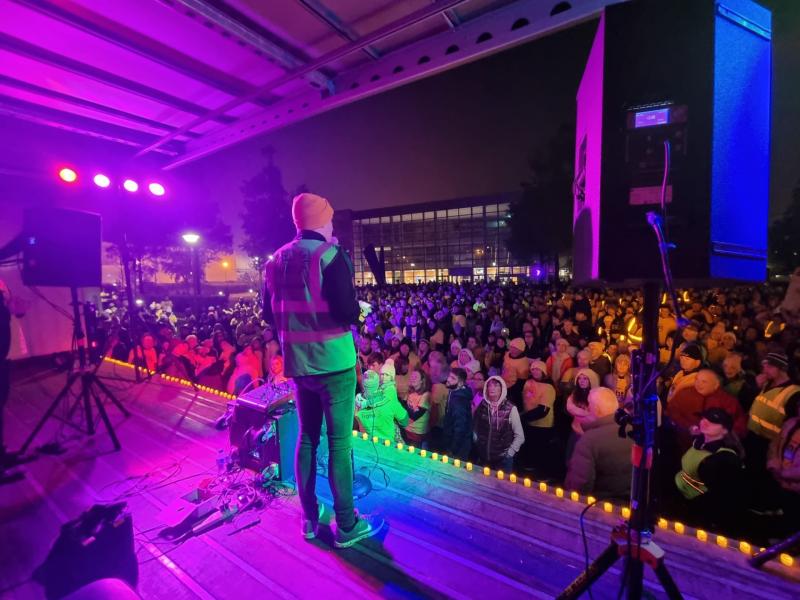 Across the North East last Saturday morning, thousands of people came together to meet the dawn in the Darkness into Light walk in aid of Pieta House, the centre for the prevention of suicide and self-harm. It was the first “in person” event in Dundalk since 2019, and this year saw many new venues including Ardee, Dunleer, Cooley, Tallanstown and Stabannon host their own Darkness into Light walk.

After a hectic few weeks preparing for the walk, Event Director Seán Kelly, said he was “exhausted” but was very happy as the event “went very well.” Last Friday and Saturday were two very busy days for the Darkness into Light Dundalk committee. “I got up of bed on Friday morning at seven o'clock and didn't get to bed until Saturday night, so you can imagine”, laughs Seán, speaking to the Dundalk Democrat.

With worries that people might not turn up due to the heavy rain last Friday, Seán said he was relieved to see that the rain was to finish up on Friday evening and a post was made on the event's Facebook page to let people know. Come the early hours of Saturday morning however, the nerves were beginning to show a little. Seán says that he was a bit “nervous around half three, once the music started there wasn't that many of a crowd there but within 15 or 20 minutes, hundreds and hundreds started arriving.” The crowd grew Seán says, until around 2,000 turned up, gardaí estimated.

Prior to the walk beginning, music was provided by the wedding band, Long Time Coming, who came directly from another gig to set up and perform. Seán also spoke to the crowd before the walk where, for him, one of the most symbolic things happened. “I asked people that we have a moment silence to remember those that we lost to suicide”, he explains. “The whole crowd fell silent, to have a couple of thousand people completely quiet for one minute in darkness was a really nice moment.”

Seán was happy to see a lot of engagement between the committee who organised the event and people on the walk. “The amount of people that came up to each of us in the canteen afterwards, and thanked us and told us their story, of people they lost, how much the walk meant to them and how important it was to get out and do something, the fact that it's great to be able to do it again after missing it for a couple of years [due to covid]. “I think it had a very positive effect for a lot of people.”

The walk took place in many other locations in the North East this year but there was still a large turn out in Dundalk. “We had Ardee, Dunleer, Drogheda, Cooley, Tallanstown, Stabannon, Clogherhead, there was venues everywhere”, said Seán. “So the fact that we got such high numbers has to be a testament to the work that went into promoting it and organising it that we still got such high numbers, even though we were literally surrounded by other venues.

“And even in south Armagh, Camlough, Crossmaglen, Castleblayney and Carrickmacross, they all had venues. So when we did it first, there was just ourselves and Drogheda four years ago and it's great to see now that venues have sprung up everywhere.”

It was well into Saturday before the committee could finish up and go home. “The last people left around half six- seven o'clock and then we had to do the clean up, drop all the stuff back, so we had a busy morning to say the least”, he admits.

It will be a couple of weeks before a final tally of the funds raised will be known, Seán explains. “It's hard because the money is still coming in, Pieta don't give us an idea of where were at until they have everything in”, he says, adding that they have donations that have yet to be lodged.

Seán say that he is very thankful for the support given to Darkness into Light. “The people of Dundalk, everytime they are asked to help do something, they always come out in large numbers and show their support. “We have lost so many to suicide, every family and every friend group has been touched by losing someone to suicide. But it's good to see that on mornings like that, when we need to rally together we can. “Its a great town for that with a great community spirit and just to say thank you very much.”