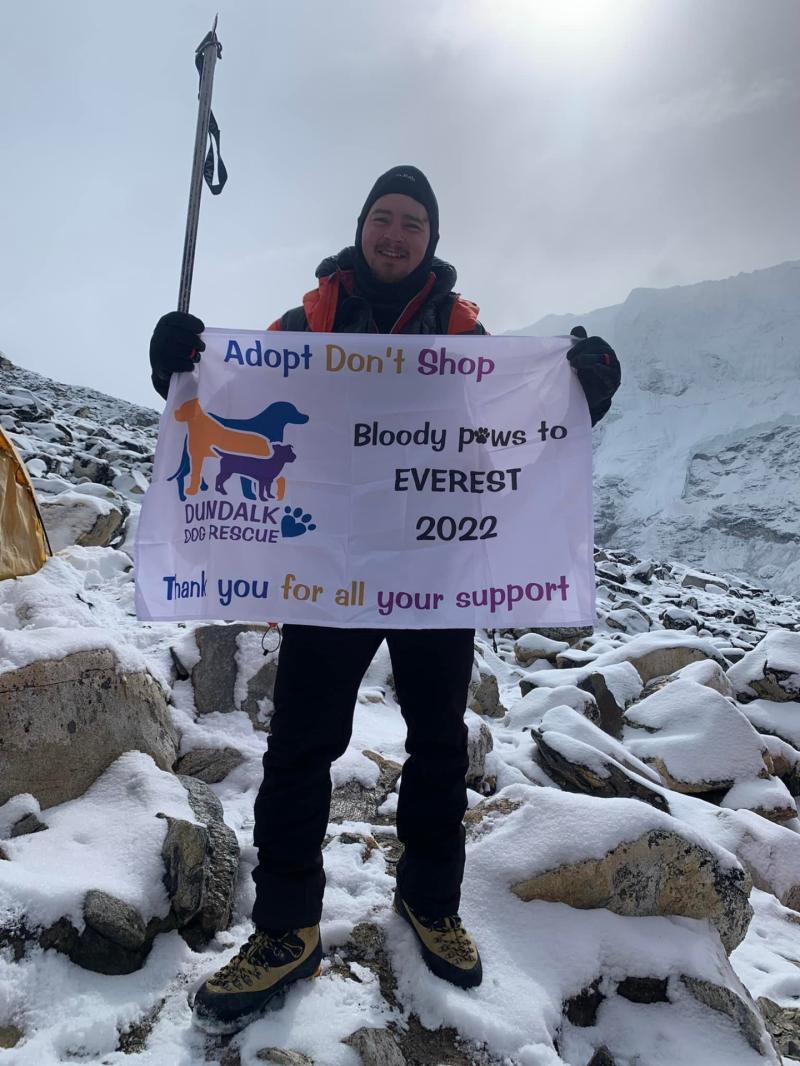 Ravensdale man Ryan Doherty has raised over €10,000 for Dundalk Dog Rescue as part of his Bloody Paws to Everest climbing fundraiser.

The courageous adventurer made it to the Everest base camp on April 24th after a ten-day strenuous trek enduring harsh conditions with some team members suffering illness.

At the weekend Ryan tackled Island Peak mountain in the Himalayas, which stands at 6189 metres, getting to within 200 metres of the summit before the brave attempt had to be called off due to hazardous weather.

The mammoth climb was the culmination of months of training for 27-year-old Ryan who owns Doherty Sports Therapy.

On an update on his Facebook page, Ryan said: “Hey guys, unfortunately we didn’t make it to the summit.

“We had two attempts, the first attempt we got to 5900m just 200m short of the summit and a blizzard came in on us just before we got to the icefall.

“One of the lads needed medical attention and was injected with dexamethasone so the main thing was to get him down.

“We couldn’t proceed without the doc.

“I’m okay I felt really strong and healthy but it was out of my hands, we made our way down to a small village 1000m down and the snowstorm is that bad we can’t proceed any further, it’ll take us four days to get down to Lukla before we can get a flight to KathmanduIt.

“Was far too dangerous to proceed through the icefall.

“I’m super disappointed I didn’t get to make it to the summit, but that’s the nature of the beast, the group is recovering now we have the doctor keeping an eye on the lads.”

Speaking to the Dundalk Democrat in January before he took on the challenge Ryan explained why he chose to raise funds for Dundalk Dog Rescue.

“I picked Dundalk Dog Rescue after I did a charity Strictly Come Dancing with them in 2019, I didn’t realise the amazing work they did, they really go above and beyond to make sure these rescue dogs can find their forever home.

“They raise so much awareness to help educate people to help save a rescue dog instead of buying one and fuelling the puppy farming industry in Ireland.”

Ryan’s donation page is still open and those wishing to support him can do so via GoFundMe at: www.gofundme.com/f/ 20305-bloody-paws-to- everest.