A 'somewhat accurate retelling' of the 1922 Dundalk Gaol escape 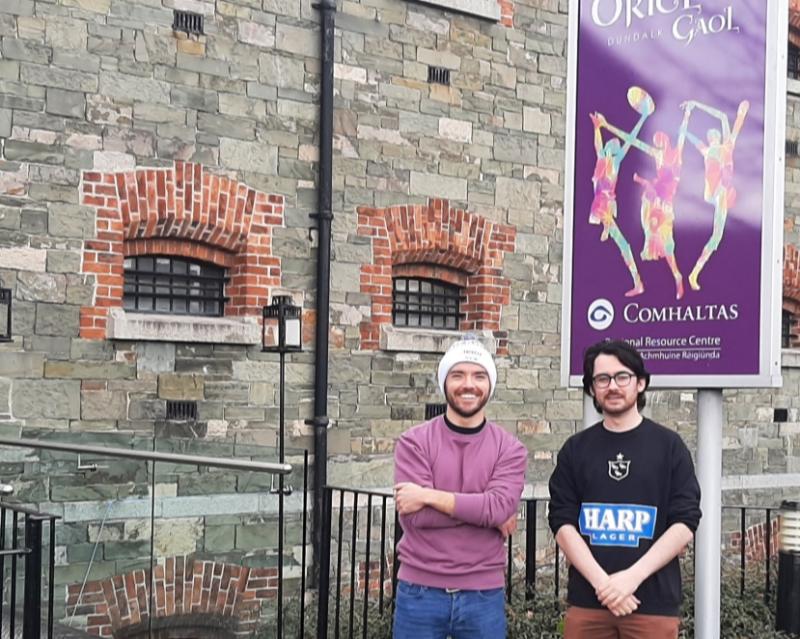 "Someone described it before as two lads in a pub telling each other stories over pints”, says Jason Brennan, stand up comedian and one of the presenters of An Irish History Podcast, coming to Dundalk Gaol on Friday 13 May. For the past few years, comedians Kevin Larney and Jason Brennan have been hosting their podcast, “Sh*te Talk – An Irish History Podcast”, to give it its full name, and are now travelling the country with their live show, retelling the local stories of the places they visit.

They describe it themselves as a “somewhat accurate retelling of Irish history stories”, where they “give their best accounts of some of Ireland's silly, strange, and downright stupid tales from the past.” The Dundalk Democrat spoke to Kevin and Jason ahead of their live show in Dundalk Gaol on Friday 13 May, where they will chat about the 1922 jailbreak led by Frank Aiken, for the 100 year anniversary of the event.

Kevin, from outside Dundalk, and Jason, from Carlow, met through the Irish comedy scene. “We wanted to do a podcast because that seemed to be a way to get a bigger audience”, says Kevin. “There was a show – The Dollop, it was an American show – I was going to say they do the same thing as us – we ripped them off basically”, he jokes. The two comics thought it would be a good idea to do an Irish version of what they're doing.

The two have spent quite a bit of time in and out of the country over the past few years and have even recorded a lot of episodes of the podcast through Skype or Zoom. “When I was over in Texas”, says Jason, “I was listening to a lot of Irish centric podcasts, like the Irishman Abroad, or just listening to friendly familiar voices, even if I don't know them.
“You end up realising there's not too much stuff around Irish history. A lot of it is just conversations between people. I don't know how many people want to listen to two young comedians talk about what's going on in the news or politics or anything, it [history storytelling] was an easier route to go down.”

They certainly have an impressive body of work built up over the past few years. A visit to their site, https://shitetalkhistory.libsyn.com/ reveals a trove of over 100 stories covering everything from the local myth to stories of national and even some international events,
“The first one was the Boston Strongboy, about Jack L Sullivan”, says Jason. “If you ever see, you know, that photo of the boxer like that”, he says, striking a boxer pose. “That's a son of two Irish immigrants over in Boston, and he became a heavy weight champion, and the last bare knuckle heavy weight champion ever and actually the first ever Marquis of Queensbury rules champion. We just did him because he was on the back of a bottle of whiskey.”

“I think the longest one we did”, says Kevin, “we ended up doing a series on the 1690 Battle of the Boyne, that was about five or six parts. That was during lockdown where we were like, let's just do this. So that's an in depth history one.” “And last week we were in Mullingar and we did the life of Joe Dolan”, he adds. “So its anything in between those two”, says Jason. “I think the only criteria was that there had to be an Irish man, woman or child there somewhere”, Kevin adds.

“We have the diaspora of Irish people”, explains Jason, “and the second and third generations around the world, there are so many interesting stories there, that we're like, 'ah I want to do that person', 'we have to cover this'. I know they might be second or third generation, they might not even associate themselves with Ireland but if its a good story...” The motivation to tell a good story rather than trying to teach people their history certainly seems to be the priority for both the podcast and the live show. “Someone described it before as two lads in a pub telling each other stories over pints”, says Jason, “yeah, if we could just keep it like that.”

“The story of what happened here is fascinating”, says Kevin, referring to the prison escape in 1922, where members of the 4th Northern Division, under divisional leader, Frank Aiken, detonated explosives and a hole was blown in the wall on the Ardee Road side of the prison, with 105 men escaping. "But maybe people are a bit put off by its a 100 years ago, or think maybe you need to know all the moving parts. We came at it from such a – I won't say an uneducated - we came at it from the ground up, we didn't know anything about it, or very little, so you're doing all the bits and you're kind of explaining it in a way that, anyone can go in there, on 13 May, and walk away with 'I understand what the story was and its fascinating'.”

“Its not that its important in a historical sense – it is important in a historical sense but its not just like that – it's jailbreaks! A lad blowing a hole in a wall! It's a movie worthy story, it's a really interesting story and it also happened – here, 100 years ago. And it's of historical significance. So its not just telling stories of old battles, just because of what happened afterwards, what impact they had on the country, just interesting stories to hear.”

“I guess its there for the listeners to go and do more research themselves if they want”, adds Jason, “realistically most episodes [of the podcast] are going to be about an hour and a half to two hours – some of the events in this country you could spend a week talking about.”

Doors open at 8pm on Friday 13 May at the Oriel Centre in Dundalk Gaol, with the show starting at 8.30pm. Tickets are €12 and can be booked through the Oriel Centre website or directly on eventbrite here. You can also go to shitetalkhistory.libsyn.com/ to follow the podcast and find out about other upcoming shows.