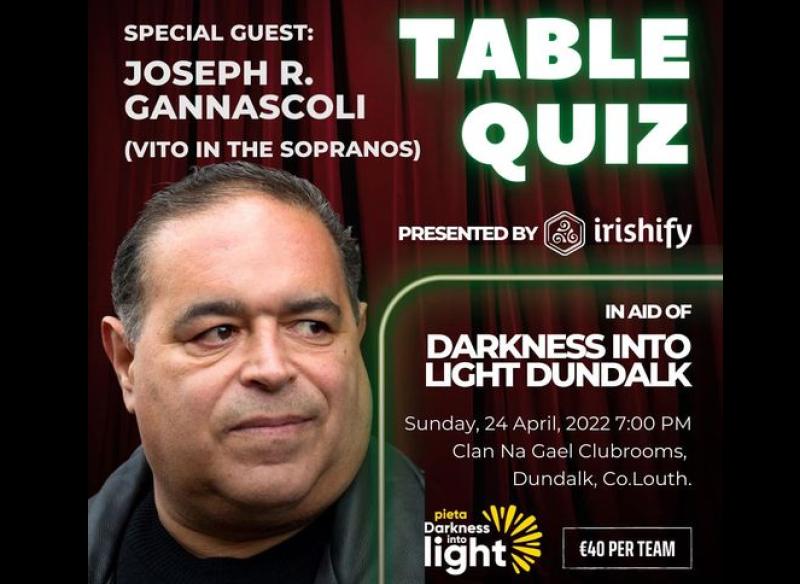 The Sopranos star Joseph R. Gannascoli, who played the cult character Vito Spatafore in the HBO series, will host a table quiz at Clan Na Gael's club rooms to raise funds for Dundalk Darkness into Light.

The event will take place on Sunday 24th April at 7pm and is €40 for a table of four.

"We're delighted to have such a big name support a cause close to my heart," explains Paddy Casey, co-founder of Dundalk-based Irishify.com.

"We hope the event will raise awareness and funds to support services for people who need them when they need them."

‘Threading the Táin’ launches in Dundalk this Friday

Casey has been involved in fundraising for several mental health charities and has raised over €30,000 in the past few years. More information can be found at www.gofundme.com/f/irishify-fundraiser-in-aid-of-darkness-into-light

The quiz is preceded by "An Evening with Joseph R. Gannascoli" on Saturday 23rd April in McAlester's Bar on Bridge Street, where the Brooklyn-born actor will discuss all things Sopranos, followed by an audience Q&A.

There are limited tickets available at www.ticketstop.ie

The actor went viral amongst football fans last season with a series of online videos focusing on his intriguing support for Dundalk FC.

Both events are co-hosted by local firm Irishify.com, a platform on which the 62-year-old has proven a big hit offering personalised shoutout videos for fans.