Students demonstrate resilience and commitment in the face of adversity 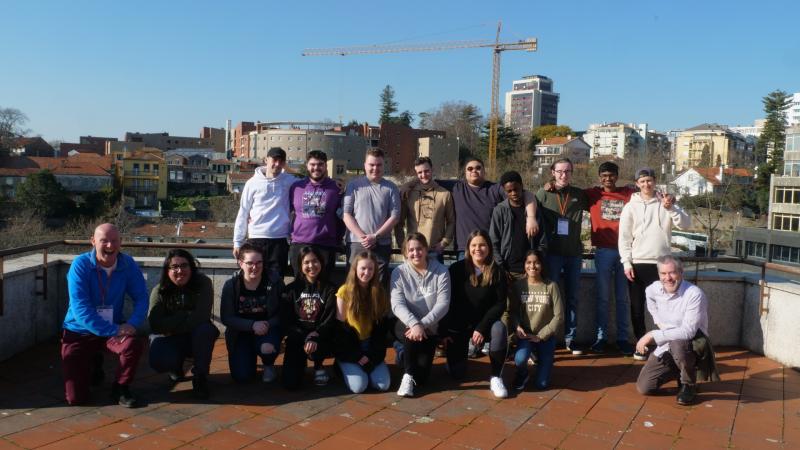 A group of students from Dundalk Institute of Technology (DkIT) showed resilience and commitment in the face of adversity when they managed to complete their online January exams whilst on a trip to Porto (Portugal) where they were participating in a European Games Development project.

This project which hinged on the attendance of DkIT students was almost cancelled, the timing of the Porto visit initially was not a problem, however when their exams got delayed due to Covid-19 and were rescheduled to the exact time of the Porto trip, it caused the predicament.

The students were given an option of attending the project but having to do their exams while abroad, which they agreed to do as they did not want to miss out on the experience. Due to their commitment to participating in the event and their perseverance to their studies a dedicated space was found at the project venue which facilitated students to complete their exams.

These exams were supervised by staff on the trip to ensure academic integrity was maintained. Also, because of Covid-19, Portugal required all people entering the country to complete an antigen test. This resulted in three DkIT students delaying their flights for four days. One unfortunate student who took the later flight even had to complete an examination in an airport terminal building!

The project also involved three international Non-Governmental Organisations (NGOs) from France and The Netherlands. The students were formed into international teams in such a way as to ensure that each team contained students from each college. The student teams were tasked with building a prototype of a game in one of three areas: fighting extremism, gender discriminations in public places, and plastic waste. The target audience for the games was set as being second level students aged 15 to 19.

At the end of the intensive project, a winning game was selected by an independent panel of NGO and technical experts. The winning game idea will now be developed into a full game by the consortium. This game will be made available to secondary schools within the EU.

"I think the group completing their exams abroad like this is a great demonstration of the determination of our students to overcome adversity and still achieve all they had set out to do. Their dedication to this games project and its potential positive impact on European adolescents is a testament to them."