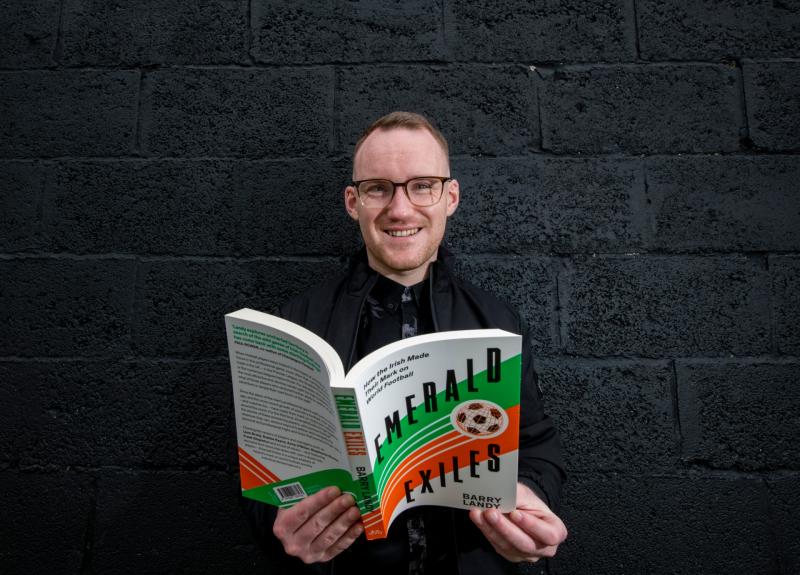 There is no hiding from the fact that Dundalk is well and truly a football town. Be it the many who flock to Oriel Park every week, those involved with local sides in the Dundalk and District League or NEFL or just the many followers of the beautiful game in general.

If you enjoy the sport, you are bound to find plenty of good conversation, not to mention some top-class footballers throughout the region and beyond.

One such follower of the sport who took his obsession with soccer even further is local freelance journalist Barry Landy. Not just happy watching local football or even the many highs and lows of the Premier League, he wanted to cast his eye further afield.

With that interest came the Emerald Exiles Page, a website he developed first as just a university project that involved him keeping tabs on Irish players based beyond the confines of the English leagues or the League of Ireland.

Little did he know back then that this ‘hobby’ would prove extremely popular, so much so that the social media page has now spawned into a book. This opportunity came just by chance when someone close to the publisher spotted an untapped idea for big seller.

“I got a good following on social media, people seemed to like what I was doing and I published a couple of things in national papers” recalled the Ardee native as he spoke about how the book came about.

“One of the people who worked for New Island Books (the publisher), her partner was a big football fan. They were home one day talking about ideas for books and remembered my twitter account which he followed online.

“He thought that would be a great idea for a book and so the publisher tracked me down online, sent me an email and just asked if I would be interested in writing the book.”

The book delves into over a 100 years of Irish Footballing history, talking about stories from the likes of Robbie Keane and his escapades in the US, along with telling the tale of when Liam Brady was one of the biggest stars in Italy.

It also brings to light some of the forgotten names who have graced the world stage, journeymen players most have probably forgotten about such as Caleb Folan and Ronnie O’Brien who brought their talents abroad without most of us knowing they had left.

Yet when asked was there any stories that surprised him during his time researching the book, Landy recalled the career of Jack Kirwan, a Wicklow native who won an All-Ireland with Dublin before going on to become the first manager of Dutch giants Ajax back in 1911.

“He had played for Chelsea, for Tottenham, won an FA Cup. He was a man with vast experience of the English game and they wanted him to come over and teach the Dutch how to play football, which is extraordinary now when you think of the view of Dutch football now globally.

“At that stage there was no distinction between English and Irish, they would have seen him as an Englishman at that point. Football was born in Britain, in England and Scotland. It was the English coaches and Scottish coaches that they wanted to bring the game to the continent.

“Jack Kirwan’s story is one I personally wasn’t aware of and I know most people in Ireland were not either and they tend to be very surprised when they hear about it, it’s an incredible feat.”

It is not just the men’s game that he sheds light on, but the many women too who went abroad in search of a career as a professional footballer.

In particular, Landy was keen to help improve the legacy of Anne O’Brien. A women seen by many as one of the greatest, male or female, to have put on the Irish jersey down through the years, she has been forgotten by many due to her exploits being largely done on the continent.

“She is one of Ireland’s greatest ever sportspeople but only ever earned four caps for her country because she played her entire professional career in France and Italy in the 70s, 80s and 90’s. That was a time when the FAI were not putting money or resources into the women’s game and essentially that meant they wouldn’t fly her back.”

“If she was around in the era of tv and social media, especially in the last couple of years where the women’s game has exploded, she would be an absolute global superstar, but it was just a different time and she missed out.”

In a county fascinated by football, the freelance writer is offering prospective readers the chance to learn about what it’s like to play the game all over the world and from a variety of different perspectives. He is hopeful it is the perfect gift for any big sports fan.

“There are Senior men’s Internationals, Senior Women’s internationals, former League of Ireland players. Players from a 100 years ago, players nowadays, even journeymen who went abroad having played in the lower leagues of England, all kinds of different perspectives.

“The book is almost like a travel book, one about emigration, obviously football, it touches on lots of different things. There is Liam Brady and Robbie Keane, people like that who were all familiar with but also plenty of names you might not be familiar with, names you’ve forgotten about.

Emerald Exiles: How the Irish made their mark in World Football is available in bookshops nationwide.

O'Byrne Cup Preview: Get the lowdown on Louth's three opponents