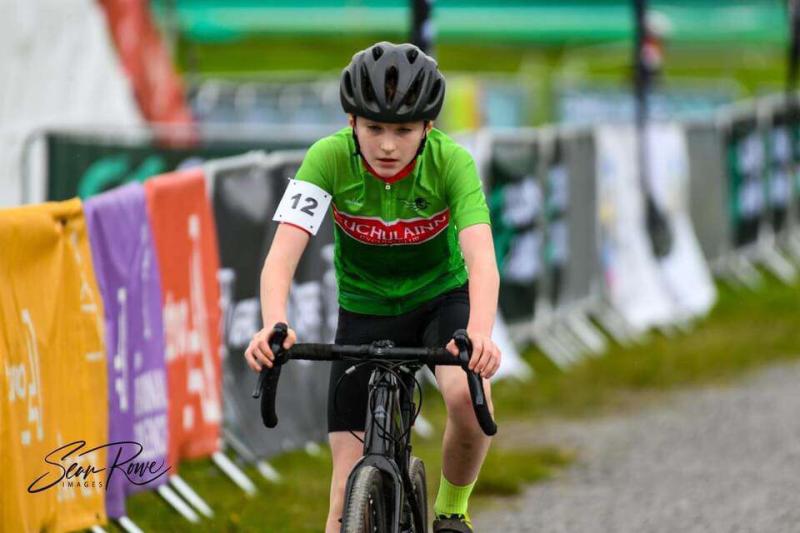 Another great day for Cuchulainn Cycling Club at round 6 of the Leinster cyclocross league hosted by Oldcastle CC at Drewstown House in Kells, Co. Meath.

The 2km long course was technical and featured a few sharp inclines in the wooded section, throw in a few muddy patches and some trails through the forest with exposed roots and it was a challenging day out.

Racing commenced at 10AM with the Under 8 race where Logan McAreavey Quilton, the club’s youngest rider, took first place starting the day off with a bang. Onto the U12 race, Michael O’Rourke competed alongside Egan Hearty. Egan comes from cycling stock as he is the grandson of Kitta Hearty, one of the club’s founding members and this was his competitive debut.

The U14 races began at eleven with a mass start with Ffion Dolan, Holly McCaffrey and Grace O’Rourke giving yet another fine display of racing, finishing 2nd, 3rd and 4th in their race.

This great result now sees Cuchulainn holding the first three places in the Leinster league. Meanwhile in the boys under 14 Shane Meegan suffered an unfortunate crash in the forest section while riding in the top 3 and was unable to continue.

In the U16 girls race Rhiannon Dolan finished in 3rd place, one of her best results in the cyclocross season so far. In the U16 boys Callum McCaffrey finished just outside the top 6 and AJ Mc Areavey Quilton suffered an unlucky puncture. It was a great day out and the club were delighted going home with 4 medals.

In the Tuesday night league Adam Gilsenan whom has been racing all season in Italy with Club Ciclistico Canturino once again gave the senior riders a lesson in Cyclocross when easily winning the race, however Johnny McCabe still remains firmly on top of the leader board.

In the underage league Eoin Davis of Bohermeen CC took the honours and has moved up the leader board just behind Darragh Murphy of Rostrevor Mountain Bike Club. Conor Goss from Cuchulainn CC keeps the promoting club's hope alive of a podium finish as he holds third position with 3 rounds remaining.