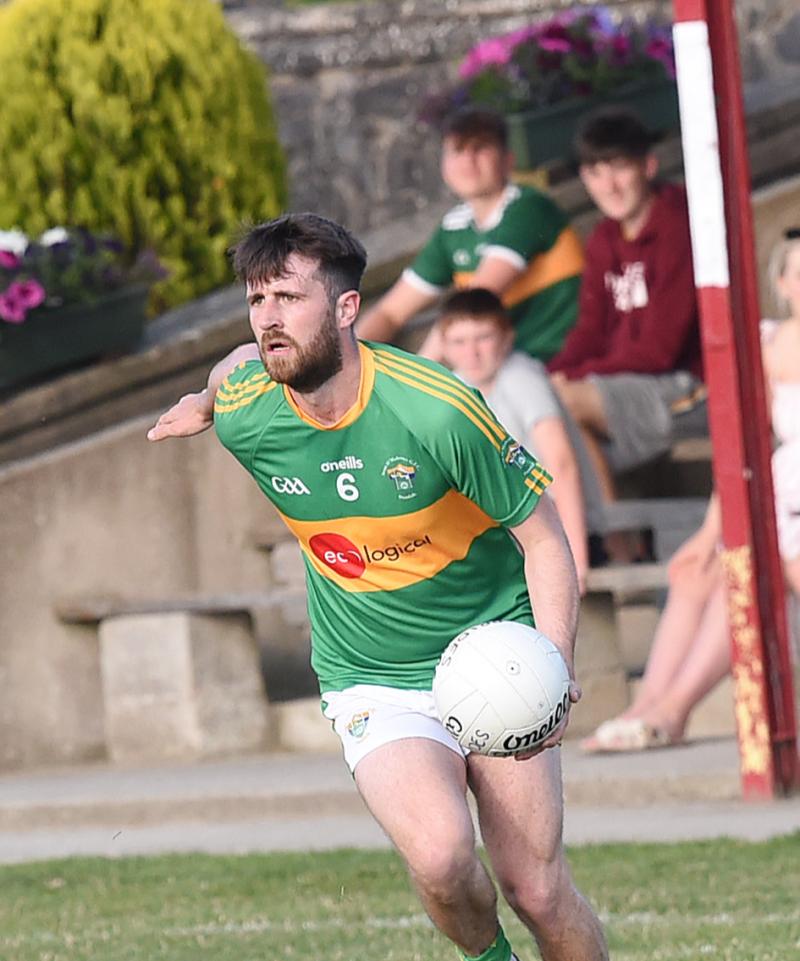 The Sean O'Mahony's second team had a well deserved win over Kilkerley Emmets on the Point Road on Tuesday evening. This was an exhilarating high scoring game, served up by two teams who worked hard and kicked plenty of suburb long range points among the 37 scores converted.

There was an 11 point advantage at the final whistle, although well deserved by the home side, Emmets never really gave up the cause and the home support were given a fright when with less than five minutes left on the clock, the away side were awarded a penalty which could have cut a seven point lead down to Four.

However Kevin Brennan somehow spread himself across the goal-line and saved the spot kick with his legs, while a brilliant 5th point of the evening by Thomas Rice, followed by another by score from Sean Cassidy finishing another great team move by smashing his first goal in adult football to the net suddenly had the final score at 3-18 to 0-16.

Both teams started the game with a stream of quality shooting, leaving the sides tied at six points apiece at the first water break. Shortly before half time Ciaran Jamison won the ball in the full back line, carried the ball beyond midfield before finding Conor Mackin who offloaded to Eoin Hannify, whose handpass put Conor McGailey in for a crisp finish in the bottom corner to the leave the lads from the quay ahead by 1-8 to 0-9 points on the changeover.

Early in the second half Conor Mackin finished another great passing move by slotting the ball into the far corner of the net, before Colin Finan, Kyle Carroll and Thomas Rice each raised the white flag to leave the home side seven points ahead with 20 minutes still to play.

Both teams continued to exchange scores until the crucial saved penalty confirmed the result. While there was a great spread of scores from around the field, Kyle Carroll had a fantastic match, landing six long range points after galloping through from midfield and linking the play from defence to attack throughout.

He was ably assisted on the scoreboard by a five point hall from Thomas Rice, 1-2 from Conor Mackin, 1-1 from Conor McGailey and Colin Finan's three points.

On Thursday evening the Sean O'Mahony's Senior team got the better of Dreadnots in a pulsating game on the Point Road, with young Conor Mackin's late goal the difference in the end.

The home side dominated the first half, although scores were hard to come by against a packed defense, but Stephen Kilcoyne did open the scoring with a trademark score after only two minutes.

Thomas Rice floated a great point over after 10 minutes, shortly after the visitors equalizer, before Stephen Fisher's angled drive was tipped over the bar by the Dreadnots goalie to leave it 0-3 to 0-2 by the first waterbreak.

Conor Finnegan then steered the ball between the uprights from a tight angle wide on the right with the outside of the boot, before Conor Mackin drilled a low shot just over the crossbar following a pitch length breakaway. Conor Finnegan completed the opening half's scoring when he deliciously floated the ball over the black spot from 50 yards,  to leave three points between the side on the changeover.

After the break, play was pretty even, with Stephen Kilcoyne and Thomas Rice landing two frees either side of a fine Ben McLaughlin point, who was put through by a brilliant John O'Brien long range pass, while the visitors also managed three fine scores of their own.

The crucial score of the match came with just over five minutes left on the clock when Ben McLaughlin threaded a clever ball into Conor Mackin who reeled around his marker before haring through on goal and smashing the ball high into the onion bag from point blank range.

The roadside sideline erupted in union, and suddenly it was a six point game with time running out for the Clogherhead side. However they did not throw in the towel, kicking three late points of their own, but could not break through a resolute home defence, who did what was required to keep possession and see out the game.

Next up is county champions St Martins in Monasterboice on Sunday at 4.30.

The Senior team traveled to Monasterboice to face the county champions St Martins on Sunday evening for their third league game in eight days, but after two good wins over the last week, a depleted lineup failed to put it up to the men from Dundalk  the from the start.

The home side dominated the first half and led by 2-6 to 0-2 points at the changeover, before the Martins upped the ante after the break, notching 1-5 on the scoreboard, demonstrating how they became county champions and ran out easy winners on a  scoreline of 4-13 to 1-7.

For our Seniors next league game, St Fechins travel to the Point Road on Sunday afternoon for a 2pm start.

Taoiseach warns Covid-19 restrictions to remain until next year