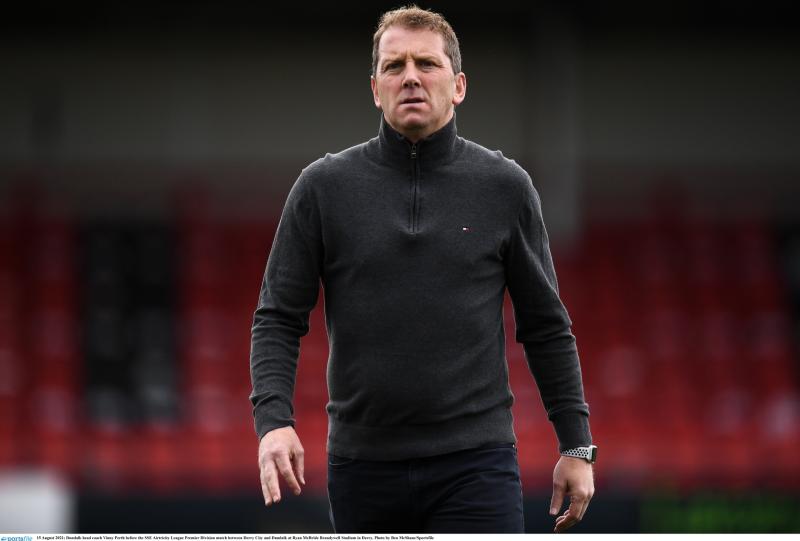 Vinny Perth says he hasn’t made any decisions about his long-term future, amid speculation he could remain as Dundalk FC head coach beyond the end of the season.

Following his dismissal from the club last year, Perth returned in June after Filippo Giovagnoli, Shane Keegan and Jim Magilton all had spells in the Oriel Park dugout.

Since then, The Lilywhites have enjoyed a remarkable upturn of form, not least in the Europa Conference League, where they were unlucky to go out at the third-qualifying-round stage, losing 4-3 on aggregate to Dutch Eredivisie side SBV Vitesse Arnhem.

Perth, who is contracted until the end of the current season, is yet to open negotiations with the Dundalk hierarchy in relation to his own future, but has held provisional talks.

“I genuinely haven’t made any decisions,” he said. “I love this, I love this environment, being back at this level. I like to think I’ve proven maybe to myself that I can turn a team around and they can play a certain style, but I haven’t made that decision yet.

“Personally, the last 12 months were very difficult, so I haven’t made that decision. I am discussing that stuff in a lot of detail with the club and what I’m hearing from them tells me maybe it is a good opportunity, but it’s still early for that.”

In order to return to the European stage again next year, Dundalk need to at least finish in the top four in the SSE Airtricity League, or failing that, defend their FAI Cup crown.

“There’s plenty of points to play for,” added Perth. “We’ve got a squad capable of being back in Europe and it’s the job of myself and all the players to get this club back to Europe by the time the season ends and see where that takes the club.

“We’re on the back foot and we can’t afford to lose very many matches between now and the end of the season or else someone has to have a collapse. The problem is we’ve got three or four teams ahead of us as well.

“Maybe there will be a fourth spot in the league, but we’re chasing the teams ahead. We’re relying on a lot of things to go our way.”

The 166th edition of the Louth Derby will be the first time over 200 supporters will be allowed into Oriel Park, with 500m vocals fans set to make their voices heard on Friday night.

Speaking to the club’s media team Perth was excited to see the attendance increase, their absence in the ground being a huge loss to the club since the start of the pandemic.

“I think it has been a major disadvantage to this club over the past 18 months not being able to have our fans in the ground,” he said.

“While we’re still not close to having 3,000 people in the ground, and The Shed singing and dancing, it’s really important that the fans back us through this difficult time and get behind us whenever they can.

“They did that in Tallaght for the recent European games and I think it’s hugely important that they get behind us again in Friday’s Louth Derby.”

The local rivals have already clashed three times this season. In the annual pre-season Jim Malone Cup fixture The Lilywhites came out on top 3-2 in Drogheda when then under the tutelage of Shane Keegan.

When they last met in Oriel Park back in April, it was another tight affair as goals from Dave McMillan and Han Jeongwoo saw Dundalk record a crucial to 2-1 win in what was their first league win of the season.

The most recent game between the two sides happened in June, a Vinny Perth led Dundalk running out 1-0 winners courtesy of a Michael Duffy strike.

Dundalk’s recent form has seen them record three losses on the bounce, losses to St Pat’s and Derry City coming in between their narrow defeat to Vitesse. They now sit in seventh place in the table, just two points above Waterford who are currently in the relegation play-off spot.

Patrick McEleney, David McMillan and Darragh Leahy all miss out while Daniel Kelly is rated doubtful but new signings Cameron Yates and Sami Ben Amar are both included in the squad.

The match on Friday evening will be streamed live on LOITV (kick-off 7:45pm), with match passes costing just €5.