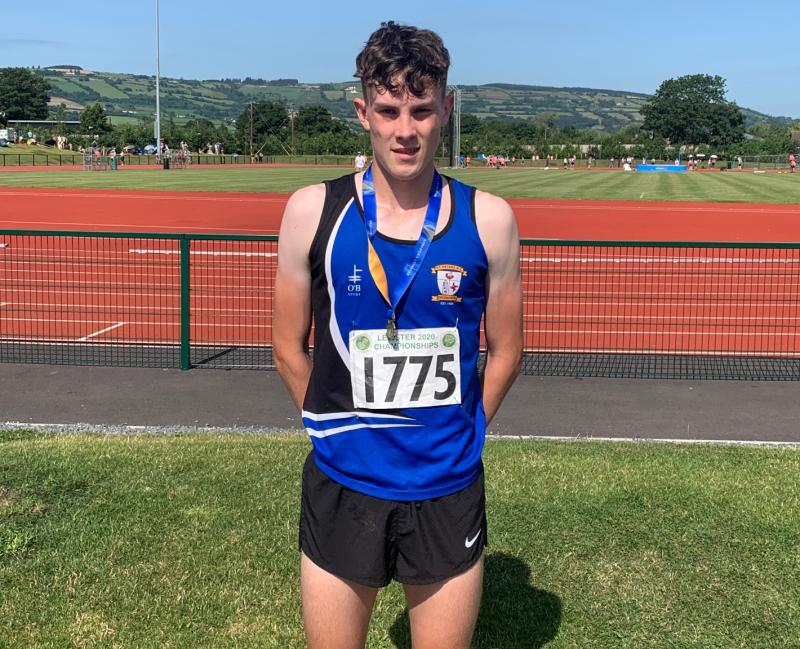 Rory McLoughlin, with his gold medal he won in the U18 800M's race at the Leinster Championships in Carlow

Saint Peters AC Athletes travelled to the fantastic Carlow IT for the Leinster Juvenile Track & Field Championships which took place over the weekend and it was a memorable one for the middle distance athletes.

Rory McLoughlin, who has enjoyed his best season yet continued to perform as he led from the gun, the result was really never in doubt as the gap looked to increase as the race progressed. He stormed to victory in a very impressive time of 1.57.98 to become Leinster U18 800M Champion.

Cian Gorham who has also enjoyed great success this season once again had a super performance in the U17 800M race. From the start he managed to go through the first 400M in 55 secs and once again ran a PB time of 1.56.64.

Unfortunately for Cian he had to settle for the silver medal on this occasion with fellow Louth athlete Neil Culhane from Ace AC taking the honors with a new Championship best time of 1.55.78. The two lads will get the chance to Renew their rivalry at the National Championships.

Niamh Brady is another St Peters Athlete that has worked really well this year and once again she managed to perform on the big stage. Niamh led out from the start and was in a sprint finish for the line, but had to settle for silver and a PB of 2.18.01.

The previous day Dearbhla Allen ran the race of her life in the girls U13 1500M in the soaring heat, this was a great race as there was five different leaders at different stages. With 150M to go Dearbhla was in fourth position but dug deep and stormed up the home straight to take the bronze in a new PB of 4.52.37.

All four athletes have now qualified for the upcoming National Championships. Sean Reilly also had a good performance in the U16 boys 1500M, running very courageously and finishing fourth place. However Sean will get another chance to qualify for the National Championships when he competes in the 800M next week.

Mark Litchfield ran his first of the year and gave it his all and should be happy with his time of 2.07 and hopefully will continue his progress after a long lay off.

Saturday kicked off with the 100M heats, the club had Ej and Efi Enouazu run in the U17 heats with both running well. Efi managed to get through to the final.

Ava Plunkett ran in the girls U18 sprint and ran very well missing out narrowly on a place in the final. Judith Bell was very unlucky not to medal in girls U17 100M hurdles, the luck was just not on her side as the athlete in the lane next to her crashed into the hurdle causing Judith to miss a stride and although she managed to recover she had to settle for fourth place.

Judith also managed a fifth place finish in the U17 long jump. Orla McLoughlin and Lucy Brennan were in action in the girls U14& U16 long jump competitions respectively. Unfortunately it just wasn’t their day but both learned from the experience.

Sean Allen got off to a great start in the boys U17 long jump when he leaped to a new PB of 5.51M, however unfortunately for Sean he managed to break in each of his five remaining jumps which was disappointing as one of the foul jumps was a very marginal call and if he hadn’t of fouled his jump would definitely have been a medal winning one.