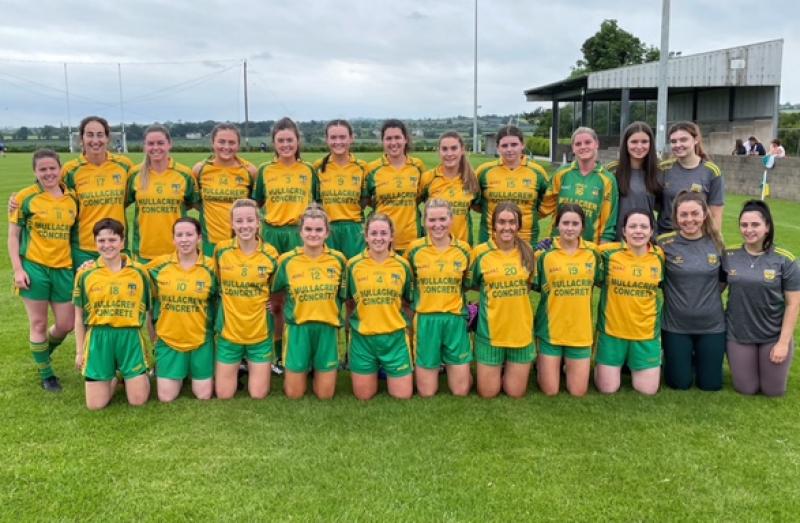 It was the first match of the season and Orlagh Byrne captain of Stabannon Parnells welcomed Niamh Callan and her Roche Emmets team to Stabannon on what was an ideal day for football.

Both teams were eager to get on the ball from the outset, but it was Roche who made the first attempt at scoring as Tracey Rogers hit the Stabannon cross bar. Orlagh Byrne was then on form and made a brilliant block to force Rogers to a wide ball again.

This resulted in a 45 for Roche which Aisling Begley put over the bar putting her side in the lead with just five minutes played.  Making her return to senior football, Caoimhe Boyle was on form, making another block forcing the Roche girls wide again.

However, the visitors responded willingly and after winning a stray kick out Abi Keenan hit the back of the net putting her side four points ahead after just eight minutes.

The pace and intensity at which the game was played in these early stages was reflective of two Division One sides with everything to prove in 2021 and spectators knew that they would be in for a highly competitive 60 minutes of football.

Sarah McArdle and Aisling Begley were on form to hit two points to no reply from Stabannon. The mid Louth side then began to enjoy the main share of possession through winning their own kickouts and on the 11 minutes Anne-Lise Pineau got her side on the score board with a point.

The home side were unlucky not to win the resulting kick out from Fiona Levins, but great play by Ciara McNally ensured Stabannon won the ball back and sister Ruth was on hand to retain possession before making a great pass to Orlagh Byrne and she made no mistake in putting the ball over the bar.

There was venom to their the attack now and while not winning the Roche kick outs, players like Amy Malone and Caoimhe Boyle did outstanding work to overturn the play and a foul on Malone resulted in Danielle Sharkey putting the ball over the bar. It was now back to a three point game.

They retained possession for the next few minutes and Sharkey and Malone were unlucky not to put their side ahead as two points and a goal were missed by the home side.  At the other end, Aoife Lowth worked hard in defence and her efforts saw Sarah McArdle and Ellie Grant for miss for Roche.

Stabannon then lost the kickout and were punished as Lauren Meehan put the ball between the posts to edge her side further ahead.

Orlagh Byrne was outstanding in defence and it was unfortunate that a great spell of play involving Niamh Sadlier, Amy Malone and Laura McNally did not result in a score for Niall Conlon's side.

Abbie Keenan was proving to be a thorn in Stabannons side and on 25 minutes she put the ball over the bar edging her side further ahead as half time beckoned.  Aisling Begley was then unlucky not to score for Roche and it was 1-5 to 0-3 points at half time in favour of Roche.

As the second half resumed, Lucy Smith making her debut in senior football replaced Anne-Lise Pineau. They started the second half strong with Laura McNally proving crucial in defence.

She found Emma Chesire in the middle of the field who did not hesitate to pass to Smith who was unlucky not to score in the first minute of the second half.  Again Chesire was on hand from the kick out and fielded a great ball to Danielle Sharkey who scored an excellent point leaving four between the teams.

The Girls in Green were dominant in this spell of play and again Chesire won the kick out and found Sophie Smith in the forwards, who put the ball in the back of the Roche net to leave it a one-point match five minutes into the second half.

Under pressure at the other end, Abbie Keenan put the ball wide for Roche.  Caoimhe Boyle was again on hand to perform one of her brilliant blocks denying Keenan a goal.

However, Jennie McCourt put the ball between the posts to edge Roche two points ahead.  At the other end Danielle Sharkey played a great ball to Niamh Sadlier, but a brilliant block was made on Sadlier as she was about to kick the ball denying her what surely would have been a goal.

Abbie Keenan was again proving a challenge for Stabannon but was denied a goal with referee Tommy MeEnteggart deemed her to be in the square. Keenan responded with a point following the kick out.

Stabannon were guilty of not winning their own kick outs for periods in the game but when Chesire won some of them, she could not be faulted for finding a player in a scoring position and this time she found Danielle Sharkey who put the ball over the bar.

Ciara McNally was having a very strong game and found Niamh Sadlier who gave a great ball to Lucy Smith and Smith made no hesitation to put the ball in the back of the net, a brilliant way to mark her senior debut and edging Stabannon a point ahead.

Roche immediately went on the attack and a point from Sarah McArdle coupled with 1-1 from Abbi Keenan soon wiped out Stabannon’s lead.

There was now four between the teams and Niamh Sadlier was again unlucky not to score but as the teams returned from the water break Abbi Keenan again struck the back of Suzanne Carroll’s net putting seven between the teams.

Stabannon bounced back with great play by Ciara McNally to find Sophie Smith who was unlucky not to hit the back of the net but settled for a point.  They then replaced Smith with Ceadoin Fleming and Deirdre Lyons came on for Emma Chesire.

As the game edged towards the end, both teams never gave up and Abbi Keenan scored again for Roche.

There opponents were not as clinical at the other end as Danielle Sharkey was unlucky when a great kick dropped short into the hands of Fiona Levins and she was then unfortunate not to score from a free kick as full time beckoned. A 7 point victory for the girls from Faughart in the end.