The Louth branch of the Irish Farmers Association held the event 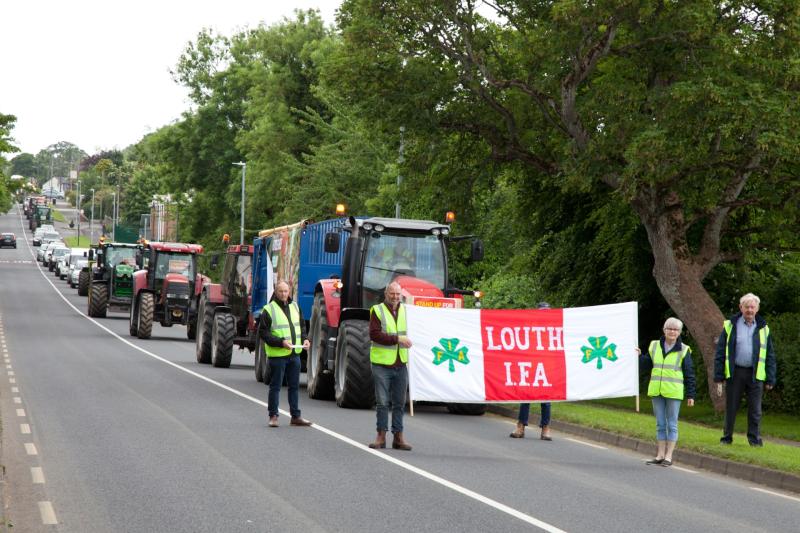 The Irish Farmers Association (IFA) held a protest in Castlebellingham on Friday to highlight what they say is the importance of commercial farming to the rural economy.

There was large scale protest action across the country, with the IFA having a presence in 30 other towns around Ireland.

Louth IFA members have said that without new policies, Ireland’s farming sector will suffer and there will be a knock-on impact in towns like Castlebellingham.

“We are here to make it clear that if they do not, these towns where we are demonstrating today will no longer be viable because the agri sector won’t exist to keep them afloat,” said Louth IFA in a statement.

Farmers have called on both the Government and the EU to introduce policies that support the farming industry, citing seven years of food prices declining.

Both Common Agriculture Policy (CAP) reform and the Climate Action Bill came under criticism, with local farmers labelling some aspects of the bill as “unfair”.

Currently, the Climate Action Bill is aiming to achieve a carbon-neutral Ireland by 2050, with five-year “carbon budgets” that have sectoral targets being a key part.

The Climate Action Plan for 2021 is currently undergoing consultation, with an interim plan currently in place.

While Louth IFA has said that they support climate action, they have also said that they require additional funding, referencing a commitment made by the Government to invest €1.5 Billion from the carbon tax into agri-environment measures.

“We hear lots of nice phrases such as a ‘just transition’.  What is just about making the primary producer carry the can for everything?”

CAP reform is also concerning local farmers, with the IFA saying that farmers are being hit with massive cuts under the EU policy.

The IFA has also said that both the farming and good sectors employ 300,000 people across the country, saying that they contributed €13 Billion worth of exports.