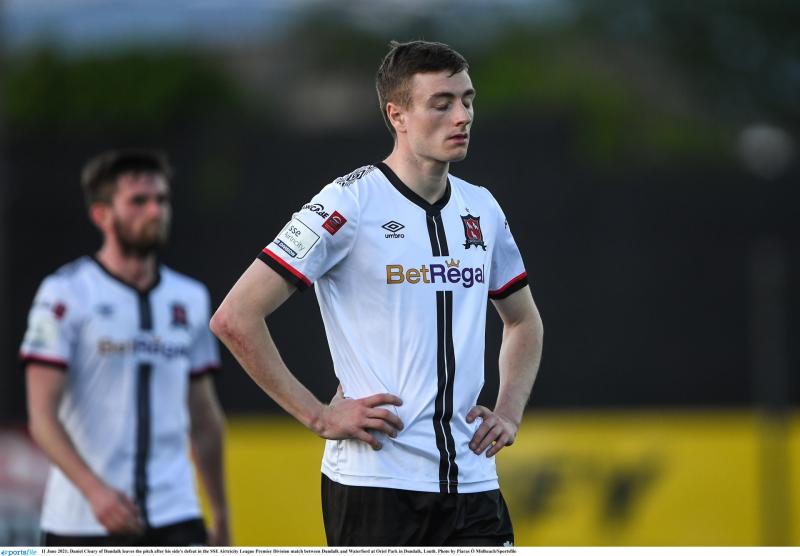 Waterford’s losing streak in the SSE Airtricity League came to an end at Oriel Park on Friday night, as they recorded a 3-1 win over a shambolic Dundalk FC.

Things had started brightly for The Lilywhites, with Patrick Hoban’s first-half penalty satisfying the 100 in attendance, but a brace from John Martin – along with Shane Griffin’s goal – ensured that interim manager Jim Magilton’s side reached a new low.

The result has left Dundalk’s aspirations of European qualification in tatters, with no sign of a managerial appointment or announcement in the immediate future, amid growing speculation that the club’s owners, Peak6, are actively looking to sell the club.

Cameron Dummigan and Sonni Nattestad – playing in just his third league game of the season – came in for Dundalk, while Ole Erik Midtskogen replaced David McMillan, who was a late withdrawal from the starting XI after he picked up an injury in the warm-up.

Now under new ownership, visitors Waterford made three changes from what was their seventh straight defeat against Bohemians just before the mid-season break, as Kyle Ferguson, Jack Stafford and Prince Mutswunguma all returned for Marc Bircham’s side.

Not since 2003 had Waterford won a game at Oriel, and under the watchful eye of their new owner, Richard Forrest, Mutswunguma had an early chance for the basement club.

Meanwhile, another protest against Dundalk chairman Bill Hulsizer took place outside Oriel before kick-off, but the hosts had a good chance when Greg Sloggett fired wide.

Dundalk had another opening not long after that when a cross was floated into the path of Andy Boyle, but the defender’s connection was never troubling Brian Murphy.

In what was a largely uneventful first half, Dundalk won a penalty when Midtskogen showed tremendous strength before being brought down in the box by Cameron Evans.

Up stepped Hoban and – despite Murphy guessing correctly – the Dundalk forward’s penalty-kick crashed in off the inside of the post to give the hosts a 31st-minute lead.

However, the visitors equalised a minute before the interval, as Adam O’Reilly played Martin through on goal, with the Waterford man finishing confidently past Alessio Abibi.

As the second period commenced, Dundalk created another good opening when Hoban teased and tormented the Waterford defence before his final effort sailed over the top.

Disaster struck for Dundalk on 62 minutes, though, when after a collision between Nattestad and Mutswunguma, referee Paul McLoughlin played the advantage, allowing Darragh Power to play in Griffin, who tapped home from close range to make it 2-1.

Mutswunguma was wreaking havoc and he forced Abibi into a save, while at the other end, Patrick McEleney’s shot forced a magnificent stop out of veteran ‘keeper Murphy.

But, an abysmal night for Dundalk was compounded on 75 minutes, when from Griffin’s short corner, Jamie Mascoll’s cross was met at the far post by the unmarked Martin, who bagged his second.