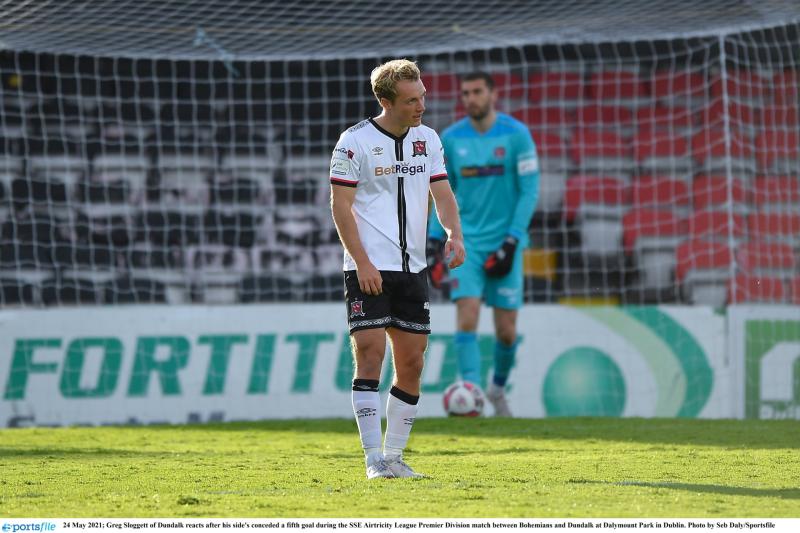 Greg Sloggett reacts after his side conceded a fifth goal during the SSE Airtricity League Premier Division match against Bohemians at Dalymount Park. Photo by Seb Daly/Sportsfile

Georgie Kelly came back to haunt his former club with a perfect hat-trick, as Bohemians thrashed Dundalk FC by a 5-1 scoreline at Dalymount Park on Monday evening.

It was a bitterly disappointing encounter for Dundalk, who looked a shadow of the side which beat SSE Airtricity League champions Shamrock Rovers just three days earlier at Oriel Park.

Bohs took the lead in what was the first attack of the game inside five minutes, when Georgie Kelly turned and finished from close range after being cleverly played in by Ross Tierney.

Dundalk found themselves two-nil down before the match was ten minutes old, as Tyreke Wilson curled a spectacular free-kick up and over the wall and beyond the grasp of Alessio Abibi.

In what was a disastrous start for Jim Magilton’s side, Bohs almost went three ahead, when Liam Burt – latching on to James Talbot’s kick-out – fired a shot which went inches wide.

The visitor’s first chance of the night came after 23 minutes, when David McMillan was denied by Talbot; with the Dundalk striker heading over the top from the resulting corner.

Dawson Devoy’s free went inches wide of Abibi’s post after that, while at the other end, McMillan couldn’t get enough purchase as he headed wide from Patrick McEleney’s cross.

Seconds later, Abibi produced a magnificent save to tip over from Tierney’s header after he got on the end of Devoy’s cross – a reminder of what the Albanian stopper can do at times.

Having created that chance, Devoy himself almost tripled Bohs advantage when he curled an attempt inches wide, while Andy Lyons also went close with a volley just before half-time.

Bohs got a deserved third five minutes after the restart, when Burt found Georgie Kelly after a quick counter-attack, with the ex-Dundalk man finishing the move he started with ease.

Keith Long’s side were reduced to ten players when their captain, Wilson, received a second yellow card for a foul on Daniel Kelly, but despite their disadvantage, Bohs never caved.

Dundalk had chances on the back of that dismissal – with Wilfried Zahibo’s header saved on the line by Talbot, before Michael Duffy’s free-kick was easily kept out by the Bohs keeper.

However, it was The Gypsies who grabbed a fourth on 64 minutes, as Georgie Kelly headed home from Ali Coote’s free to complete what was a perfect hat-trick against his former club.

Dundalk’s misery was compounded by the dismissal of Cameron Dummigan, who received his marching orders by referee Ben Connolly for a second yellow after he pulled down Burt.

The Lilywhites should have had a consolation goal when substitute Junior Ogedi-Uzokwe had a shot blocked on the line by Ciaran Kelly before Talbot saved from the rebound.

Another sub, Greg Sloggett, did manage to get on the scoresheet with ten minutes remaining, but Promise Omochere added a fifth in stoppage-time for Bohs, as Dundalk succumbed to a heavy defeat in the capital.