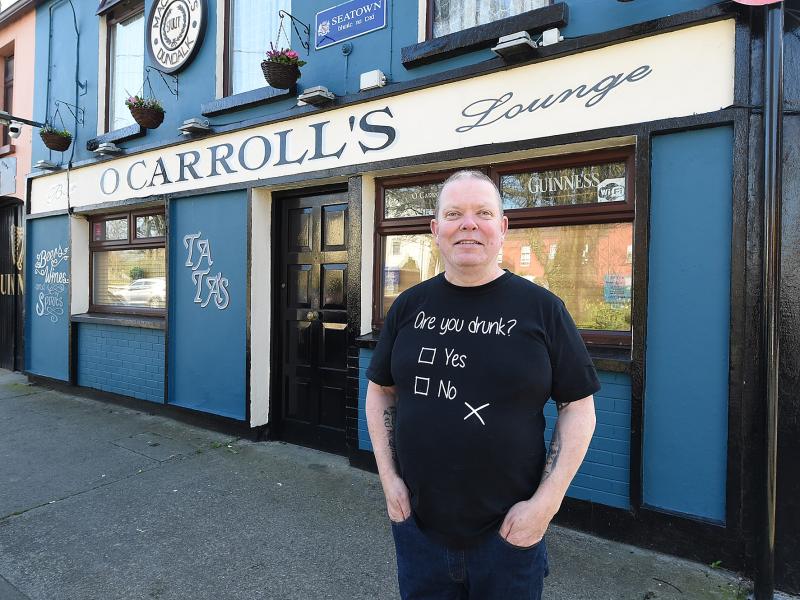 Cormac O'Carroll outside his premises in Seatown after the government announcement last week. (Picture: Arthur Kinahan)

Last week saw the government publish its latest plans for reopening post lockdown, as schools, retail and some facets of sport learnt their fate as the country looks to slowly get life back to normal post Covid-19.

On Wednesday evening, An Taoiseach Micheál Martin addressed the nation, as to let the Irish people know where the country stood on it’s road to recovery however one important area that got no mention was the world of hospitality.

Publicans have been some of worst hit businesses in the past year, as they closed their doors doing their bit to curtail the spread of the virus and keep their customers safe.

Cormac O'Carroll, the owner of O’Carroll’s Bar in Seatown, also known as Tatas was one of many publicans disappointed at the lack of news from the government last week and now feels that the time has come for officials to change their stance on bars.

I think it has gone on too long, when they’ve closed us down they haven’t done very much to change things” claimed the popular barmen.

“I had no problem closing the pub the last time because I felt they were going to do something but here we are a few months on, and we haven’t really seen any changes.”

The last year has ben tough for bars everywhere, but particularly for those that did not serve food like their gastro pub and restaurant colleagues, resulting in many traditional drinking establishments like Tatas being closed for the majority of 2020.

Despite his concerns of a lack of clarity on a return from the government, O’Carroll has been thankful for their help through the Pandemic Unemployment Payment (PUP) scheme, however he stressed they don’t have things as good as some people in the public may think.

“We did get help, there is no doubt about it, the government have been decent and done what they could, but people are under the impression that publicans have got loads of money and it’s the wrong impression.”

“They did give help and we’re not complaining but it is not to extent that some people believe. I changed my car recently and I think they feel the government money is after paying for this.”

Like so many other bars, Tatas took any opportunity they could to trade, utilising their beer garden as to safely serve customers who were outside and socially distanced from other groups.

The indoors was off limits, with ladies looking to use the toilets the only customers let walk through the bar area, before going back outside where the staff would take their orders and serve the drinks.

O’Carroll believes the system worked well but stressed that they needed to be able make use of the fine weather if they are to make any real income from a return, with the charismatic barmen having to come up with ingenious ways to keep punters interested in drinking during colder conditions.

“Last year I had people outside and what I was doing was going around in a t-shirt to give the impression that it was a bit warmer than it is, if I go around with a t-shirt and you’re looking at me thinking it is cold, then you think it can’t be cold and it must be just me.”

He has tried to make the most of the time off, something which is rare in the trade, spending more time with his grandchildren, looking after his father and doing some work on the pub such as painting which in the past he would have had to pay somebody else to do.

A lot of negativity has surrounded the trade, but the popular publican felt there was a need to stay calm and keep the head up ahead of a reopening later in the year.

“If you surround yourself with people who are downtrodden all the time, you become downtrodden. That’s a big problem as people are very negative and they have to be positive, if you can’t go back to work and you’re off, make the best of your time now as publicans don’t tend to get time off at all.”

“My advice to publicans is to do something, be active and make the most of this time. I think when they come back, they will realise they spent too much time whingeing when they should have made the most of it.”

Like pretty much every pub in the country, Tatas is ready to open its doors at the drop of a hat but would only do so when given the go ahead by the government as the safety of his customers is still front and centre in his mind.

“I could open the next day, without a shadow of a doubt. I have it spotless, cleaned, everything sanitised and have the beer garden ready. They are all things I’ve been doing to keep myself busy anyway. If I was told next week that I could open, then I’d be ready to go straight away.”

“The only way I want to open is safely and when we have the word to do it, I wouldn’t open if that isn’t the case. I wouldn’t take that risk.”

The Vintners’ Federation of Ireland (VFI) says the continued absence of a coherent roadmap to guide the pub sector towards reopening is causing huge distress to publicans, their families and staff.

The VFI has described the announcement by Government about the planned easing of restrictions as a 'missed opportunity' as it should have contained clear details of how pubs can reopen.

The VFI says that while public health, rightfully, remains the number one concern, Government needs to create a plan that allows the hospitality sector understand and plan for how it is to reopen. Questions like how many people need to be vaccinated before pubs reopen need to be addressed.

Padraig Cribben, VFI Chief Executive, says, “the pub sector is not calling for a reopening date but we urgently require an understanding of how we get to reopen. Right now, our members exits in an information vacuum that is causing severe distress."

“Countries like Denmark and England have clear timelines for reopening different sectors of society. We need a plan that links the vaccine roll out to reopening. We’re heading into April with no clear idea about how the hospitality sector will get back on its feet.

“The announcement was a missed opportunity as far as the pub sector is concerned. It’s very worrying for our members who badly need a some message of hope for the future”.