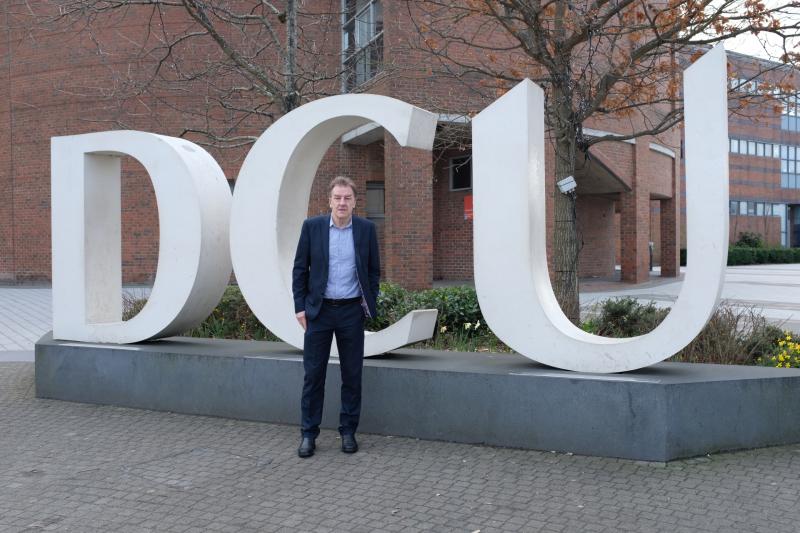 Opa Mind CEO Martin Lawlor at the launch of their academic partnership with DCU Innisigh Centre for Data Analytics and it's Department of Psychology.

In the town of Dundalk, Martin Lawlor is a sporting legend having done all there is to do during a glittering career at Oriel Park.

The popular defender spent 17 seasons with the Lilywhites, winning 5 League titles and 3 FAI Cups, including two famous League and Cup doubles and is seen as one of the greats of the game in the county.

But while his sporting merits need little reminding, what may not be known to the general public is that the Dubliner is now heavily involved in the world of mental health and wellbeing having started as a fitness guru after retiring from professional sport in the mid 1990’s.

“I started to work with people on an individual basis as a personal trainer and sort of took up an interest in the area of mental health from there” he recalls.

“I became very interested in the area of addiction and psychology, I took myself back to college a couple of times and gained a number of qualifications in various areas before ending up working with communities of people in corporate settings in the whole area of general wellness.”

Those qualifications saw him set up his own wellness business, The Life Centre where he and his team designed and created all manner of wellness programmes internally and for corporate level.

Current figures suggest that mental health pressures have cost Irish firms around €9 billion, with the World Economic Forum stating in the next ten years a negative mental health agenda will cost the world economy $6 trillion as government’s continue to ignore pleas for investment in the sector.

Lawlor is aware of the problem and does feel companies are trying to help out, but a negative stigma towards speaking up is still prevalent stopping many from working to the best of their abilities.

“There is three types of stigma, there is personal stigma with themselves, there’s societal stigma where people feel like they don’t want anybody knowing they are struggling at the moment and then the workplace stigma where people have a fear of if their position will be safe if I open up.”

“These are really powerful fears that people hold, and it affects them, stops engagement for people who might in other circumstances come to a colleague and say they are struggling a little bit and feel confident to seek help.”

Having been involved in the health and wellness space for over 20 years, Lawlor is now CEO of Opa Mind, a company creating a solution using artificial intelligence to help users to improve their mental wellbeing.

The platform allows users to keep a voice diary, logging short messages into the app, allowing people who may not feel comfortable talking about their issues to chat to themselves and use the app to get a better understanding of their issues through a confidential and private service.

The former footballer understands as humans we almost always talk to ourselves at some stage, feeling their app would work like a friend in their pocket that they can engage with, talk about their issues with and frustrations with whenever they like.

“There are people out there who won’t engage with another living soul, loved one or not they just will not engage, we are saying we understand that, and Opa Mind understands that you’re out there, you have issues and you don’t want to engage.”

“They’re able to tell their story into the voice diary and for all that they place into the diary on a weekly basis, we then do a therapeutic reflection process and we sent back some reports outlining all of those issues that are going around people’s heads, concentrating on the central core areas that are bothering people and make them aware.”

The application is unlike any mental health platform currently on the market, not focusing on listening to soothing music or cognitive behavioural therapy instruction, but instead taking the user on a journey of discovery that empowers them to learn more about themselves.

The goal of the platform is to let users know what their problems are, before letting the mental health professionals finish the good work done through the app.

“The ultimate aim for Opa Mind is to eventually massage and very gently guide people towards engagement with the therapeutic community who would guide them on that final mile towards a brand-new life, leaving behind a debilitated existence that some people have led for many years.”

The app is still in its Beta phase, but they hope to have the platform live in the next six months and have recently launched a new campaign, Lend Your Voice, calling on the public to send them short messages needed to help their artificial intelligence recognize different voice patterns.

They are calling on the people of Louth to provide four or five samples of their voice, no more than a minute long outlining if they had a good or bad day today, all logged onto a simple webpage with no names, phone numbers or email addresses needed as sign up has complete anonymity.

“We are asking people to do a simple thing to make a major contribution to the mental health agenda of people in Ireland, of their friends, their family by helping us with our appeal through a couple of voice samples.”

“We use them in a very ethical way, completely for research in collaboration with academia through DKIT and DCU, operating under the highest level of ethical standards. What we are asking people for is their help, in reaching out to us with an open mind and giving us a hand.”

Those looking to get involved can do so by visiting lendyourvoice.opamind.com, with updates on their progress available through their social media channels.