Eco Warrior: 11 Year Old Ellie Hoey has her letter to Minister read aloud to the Oireachtas 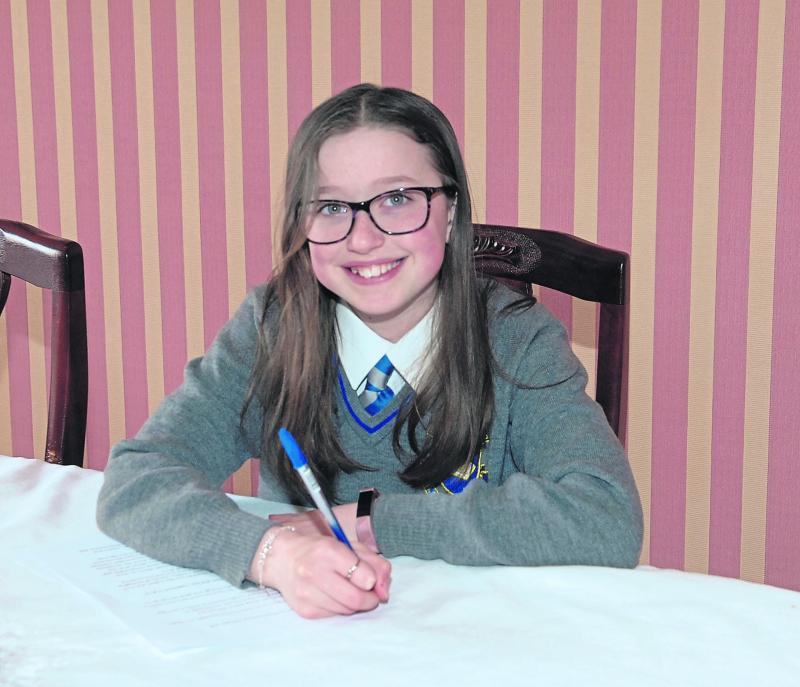 Ellie Hoey wrote the letter to Minister Eamon Ryan with a view to learning what plans they have to make Ireland a greener country. Pic: Arthur Kinihan

Can you think of what was the pressing issue on your mind when you were in the early years of secondary School?

Was it good grades, that girl or guy you liked noticing you or were you only worried about how the county team was going or if your side was going to find glory in the champions League?

These are some of the many things that were on the minds of most pre-teens, but somebody who has stood out from the mould and thought about the bigger picture is Ellie Hoey from Dundalk who has the wherewithal to think about world issues despite being just 11.

The Dundalk CBS student recently wrote an email to Minister for The Environment and Climate Eamon Ryan, calling for a variety of answers from the Green Party leader in a very eloquent argument that was read aloud in the chambers of Dáil Eireann by Senator John McGahon.

In the email, the young activist called on the government to act on those companies that have the funds to change to compostable material but refused to do so, while also worrying about the current high levels of toxic pollution in our lakes, rivers and oceans.

She also spoke about the research she had done, that Ireland had produced over one million packaging of wastes in 2018 for the second year in a row, while fretting over the fact people were using too much single use plastics like straws, cups and shopping bags.

“I think this is a very important topic and almost more important than covid-19 because we have found a solution to Covid-19, yet scientists are still a little unsure about how to stop climate change” the letter states.

“I know I’m only 11 years of age, but it is me, my children and my grandchildren that this is going to have lasting effects on, so I wanted to write this letter to you and ask what you and your department are doing presently or planning to do in the close future about this.”

Gerard Hoey is her proud father and believes that her interest in the subject stems back from her work on the green school committee in the past year, when his daughter was looking at something to pursue during the pandemic.

Yet they were still taken aback when seeing she had written such an impressive letter, something he gives his daughter full credit for stating her activism and passion did not come from anything she learned at home.

“Ellie is very committed and certainly very driven, once she puts her mind to something, she gives 150 percent to it” he claimed. “The first time we were aware of this was when she sent us a copy of the email she had sent to the Minister and we were wowed by it.

“She has done it on her own merit, she is keeping us in line now, it wasn’t anything she got from us, she has probably become aware of it through education in school and in the CBS through the teachers she had, and I think she is of a different generation that is starting to look forward in time.”

Ellie has been blown away by the level of traction her letter has been getting online and despite being hopeful of a response from the Minister, she never expected her piece to be read aloud in the Dáil chambers.

She is hopeful that the response will have an affect on others who may not think they have a voice, that they can be heard and make a difference but stressed that it was important to do even the little things to make the world a better place.

“I think it will inspire people to see that these things can be done and it is not just the politicians that can do stuff about this, we can stand up too and if enough of us do it then eventually something will happen of it.”

“But even if it is as little as every time you get a plastic cup or straw you recycle it, then at least that is doing something instead of not recycling it at all.”

After her letter was read out to the Oireachtas, The Green Party leader did respond to many of her queries stating that it was his top priority “to tackle the blight on our streets, countryside, beaches and our oceans, as Ellie has set out, caused by mismanaged plastic waste”.

Minister Ryan outlined several measures he has proposed and hopes will be implemented, one such being significantly reducing the amount of single-use plastic cups and containers that are placed on the Irish market.

When coffee shops and restaurants reopen after the Covid-19 pandemic, Minister Ryan said he will be trialling the elimination of coffee cups entirely in selected towns with a view to achieving an eventual full national ban on them.

“It will create a better economic system and less local pollution and there will be less long-term plastic” proclaimed the minister.

“It will be there not just in the time of Ellie’s grandchildren or great grandchildren; but one could say great many times over and it would still be there in the environment.  By making this change now we will clean up our act for the next 500 years.”

Making promises is part and parcel of the political game, but in Ellie Hoey the famed environmentalist may have met his match in the young scholar who will not be taking no for an answer and will hold him responsible if his plans do not come to fruition.

“With the new bill he past and all the promises he mentioned and how long it would take, in a year or so if nothing like what he said is going to happen, I’ll be writing him a letter saying he told me this was going to happen, you promised it and you didn’t do it and I will hold him accountable.”