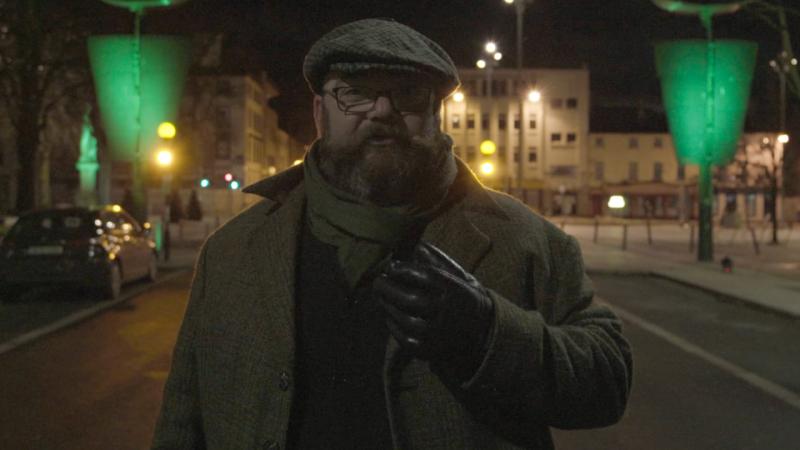 While we may have all been stuck at home on our national feast day for the second year in a row, the St Patrick’s Day Committee in Dundalk has helped to lift the spirits of the town with a short video that showcased the beauty of the area and left us remembering the great days spent at the parades of the past.

The video, starring well-known local actor Alvaro Lucchesi was filmed in the early hours of the morning a couple of days beforehand on the empty streets of the town, as he recalls the sights and sounds of St Patrick’s days gone by all while slowly walking the parade route.

Anne Campbell is a member of the committee and wrote the script for the film and she hopes the video will help highlight the beauty that is in the centre of town, with many landmarks lit in green as part of the celebrations.

“What we’ve tried to do is to showcase Dundalk at a really unusual time” she claimed, “we have covered all the town centre and it really gives a focus to the great work that has been done at the Square, at Clanbrassil Street and St Nicholas’ Quarter.”

The video went live at midday last Wednesday on the groups social channels and has been a viral sensation, with over 22000 viewing it on YouTube while also being shared on their Facebook page 641 times.

The St Patrick’s Day Committee were adamant something needed to be done to mark the occasion with no parades possible due the lockdown, leading to the creation of a video which looks to envisage a message of hope through remembering the days of the past.

Campbell was delighted to be able to get the Dundalk actor involved, feeling there was nobody better fitted to the role given his popularity in the town.

“There are no opportunities for public gatherings, so the committee decided to create something brand new and use it to showcase the town in a really good way, and we are really lucky to have Alvaro involved, as he is such a well know actor and really talented.”

“He has starred in a number of movies such as Ella Enchanted, the Count of Monte Cristo and he is probably best known for his role in Angela’s Ashes. Everybody knows him and he has brought something really special to the production, working really hard to convey the message in it.”