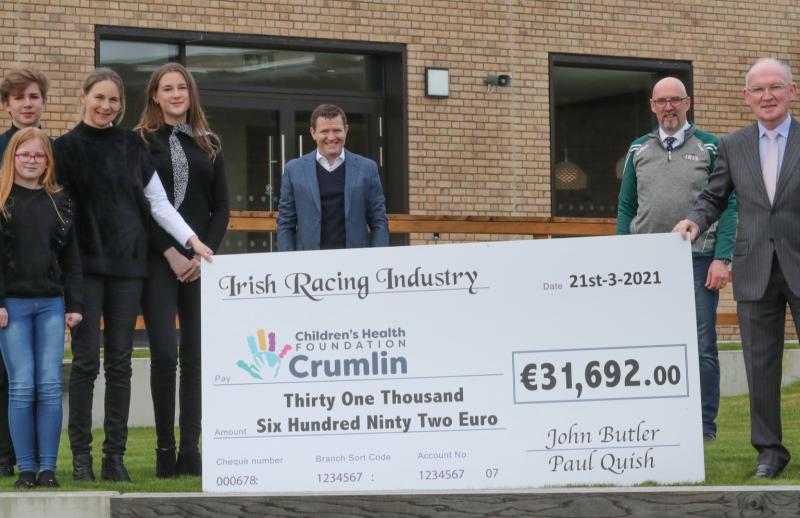 There was a poignant moment at the Curragh on Sunday last, March 21, when a cheque was presented to Dr Adrian McGoldrick representing Children’s Health Ireland for the 2020 Pat Smullen Memorial fundraiser.

€31,692 was raised by the organisers, John Butler (Jockeys Physio) and Paul Quish (Racecourse Announcer) and was presented by the Smullen family at the scene of some of Pat Smullen's greatest victories.

The Offaly native's last winner in the saddle came on Togoville at Dundalk in March 2018, while his first winner also came at the course in 1993. Smullen rode 212 winners from 1,443 rides on the all-weather at Dundalk and remains the most successful jockey at the track.

They remembered his great achievements through the renaming of their feature Group 3 race in the winter as the Al Basti Equiworld Dubai Pat Smullen Mercury Stakes last October in honour of the nine-time Irish Champion Flat jockey.

Pat passed away last year after a battle with pancreatic cancer. The organisers spoke of their reasons for raising money in Pat's honour at the weekend.

"Pat Smullen was inspirational in his support for our Jockey’s Jingle project in 2019 and the subsequent visit by jockeys, trainers and racing officials to Crumlin Hospital, so we dedicated the fundraising effort to his memory," they said.

"We specifically focused on raising funds to buy a spinal cell saver autotransfusion, an essential piece of equipment CHI at Crumlin identified to provide children all over Ireland with life-changing treatment."

"In just three weeks before Christmas, jockeys, trainers and racing personalities put the call out on social media and John and I begged everyone we met, asking racing and sports fans for donations towards the essential blood transfusion equipment," Paul Quish added.

"In addition to the social media campaign, many Irish racecourses named a race to promote the fundraising initiative. The total amount raised was a massive €31,692."